Philippines is the 2nd Scenario in the Campaign. This is a short, 15 turn scenario of a holding action against a powerful Japanese force. Some of the US troops (they have blue stars) are under the control of the AI and are being evacuated to exit hexes. You cannot defeat either the Jap air force or the Jap ground troops but you can delay their advance enough for significant forces to reach the Bataan Peninsula.

Understanding the terrain is key to victory. The map is a long rectangle with the Japs entering from the top of the map.

All secondary VP hexes are about midway down the map. Excepting the far western secondary VP, all are behind one or more rivers. In the East the Japs can be significantly delayed by blowing bridges. The West has fewer (or no) river obstacles but does contain several stretches of movement slowing jungle. In the far south you have AI controlled units which systematically move off the map on the South exit hexes heading for the Bataan Peninsula. 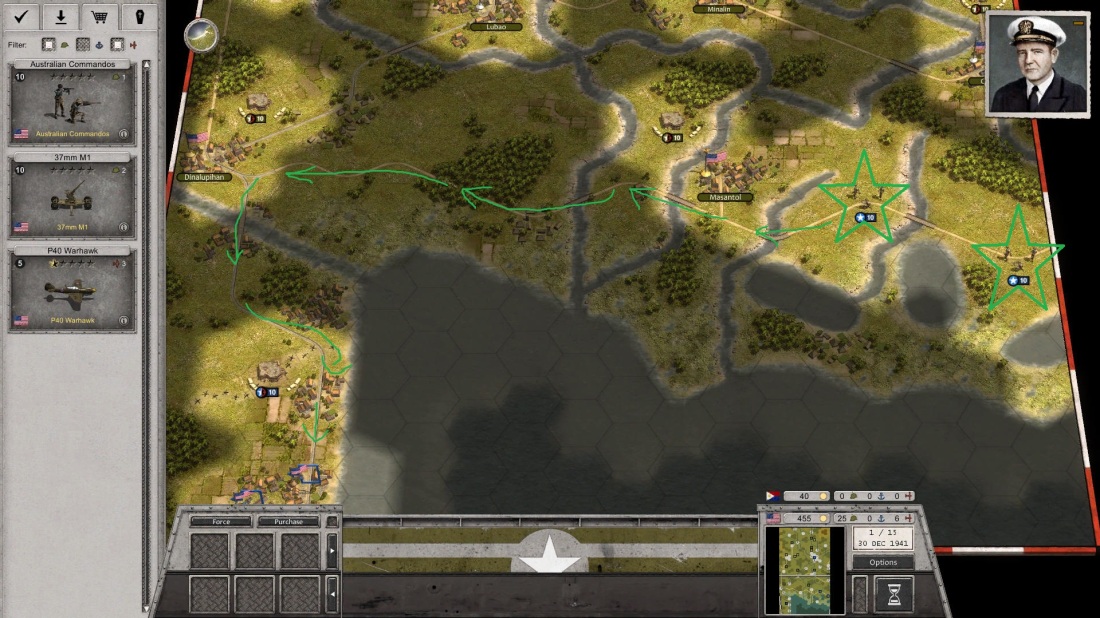 Resource points are the pool that you can purchase units. They are also used to blow bridges, put up a combat bridge, upgrade your units and other things. Armor and artillery are far, far more expensive than ground troops. Aircraft wings are also far more expensive than ground troops. For the USA, Marines have two advantages over Army Units – they do not get disorganized going through the jungle and they suffer far less disorganization doing amphibious operations.

In this scenario I’m only purchasing US Army and one US Engineering unit to preserve both my command and resource points. I’m not buying a second air unit because the Japs have too many aircraft for my forces to even gain air parity and fighter units are extremely expensive. Buying an anti-tank unit (AT), or an anti-aircraft (AA) unit convertible into an AT unit can fit my budget.

For ground transport you can either hoof it or motorize with trucks or halftracks. When you motorize a unit it costs one more command point. The command point cost limits your ability to field a 100% mechanized army. Note also that motorizing a unit is double the cost of the unit itself. Halftracks are faster off-road and have some defense when troops are mounted. Trucks go faster on paved roads, slower off-road, and provide little defense for mounted troops.

These were my unit purchases. One engineering unit mounted on a halftrack. I bought the halftrack because I have a lot of bridges to blow and if the engineer is destroyed my defensive hopes go up in smoke. The free Australian commando unit is not mounted and moves slowly. But commandos can also blow bridges. The rest of the purchases are US Army and one AA/AT gun. I reinforce the single P-40 I carried over from Pearl Harbor but do not buy a second fighter unit. I must maintain my resource points for ground reinforcements and bridge blowing. 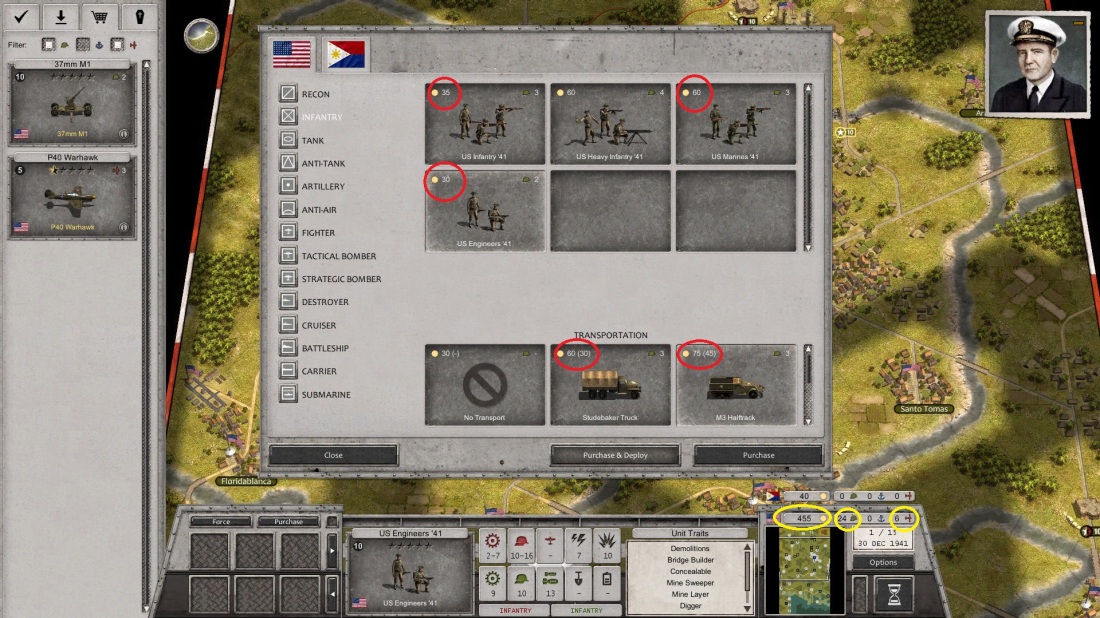 My meagre forces are deployed as follows. The motorized engineers are placed on the bridge further to the NE. The commandoes are on a second bridge. The AT gun backs the commando in case a scout car or tank attacks them on turn 1.

I have a US Army unit in a village blocking the road and the bridge. That unit will be sacrificed to delay the Japs. The blue circles are Philippine troops. The northernmost one is doomed in the initial AI placement. My other meagre forces are at choke points to slow the Japanese advance. The single P-40 squadron is off the map to the south on an airfield.

Turn 1 – The Japs destroy a bunker and set up to clobber the Philippine unit. Two bridges are blown and my commando and engineer retreat to the other side of the river. I’m very concerned about the Jap scout car on the left flank. I don’t want my positions revealed.