This scenario is 25 turns long where the sole primary objective is holding one of the four Primary VP locations. Holding all secondary VPs for 5 turns gains additional forces released from AI command. Holding all Primary VPs for 20 turns gains a few more units. Doing 10 damage with the big costal guns provides a ground commander. Over multiple plays I’ve never gotten a ground commander. The terrain is so good defensively the guns don’t get enough shots off to do 10 damage. 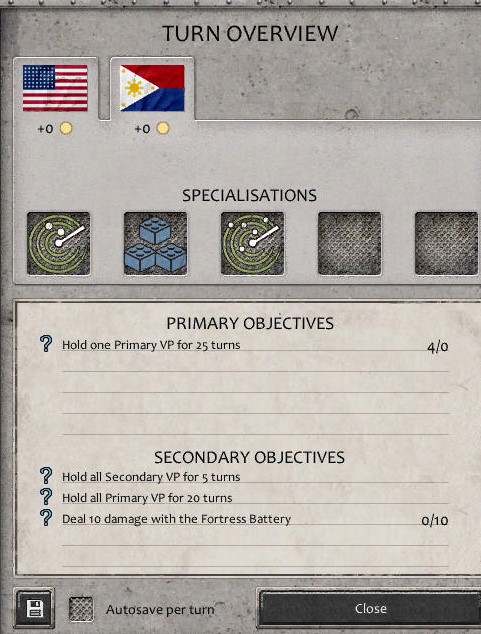 The long map is divided into two screen shots. I’ll start in the North. The Bataan Peninsula is crossed by multiple rivers, has a big mountain chain, and has quite a few jungle hexes on the left flank. The right flank is mostly open terrain between the rivers. I’ve circled in green all initial troops and placed white stars on all secondary VPs. The native troops are much weaker than the US units. If the Japs hit them in open terrain, they are done for. The Mountains, Rivers, and Jungles are significant terrain obstacles – especially for armor and motorized units.

All primary VPs are further South but the secondary VPs are close to the starting Jap lines. Holding the Japs out of the Secondary VPs for 5 turns means defending the first river line. Troops cannot easily get from the right to the left flank, so initial troop placement is important.

The South map has all 4 Primary VPs which are marked in gold. Three are on the right coast with the last at the very end of the Peninsula. Jap Marines could land behind my lines. My only defense are two circled PT boats. The main body of defenders are doomed if the Japs get behind them. Last, it is clear that the right flank is the hardest to defend due to open terrain between rivers and the location of the Primary VPs. 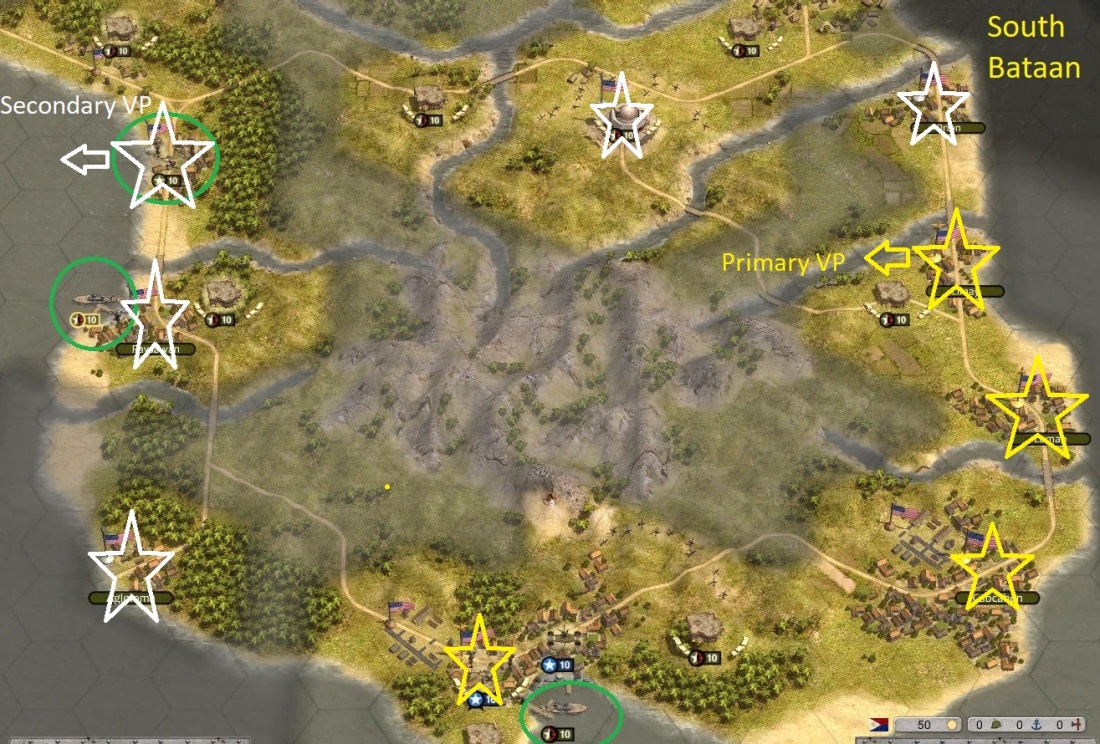 Marines cost 60 resource points compared with 35 for regular infantry. Marine units have innate supply. Isolated marines get a full turn to regain supply before suffering severe attrition. Marines are also “Guerilla” meaning they move through Jungle terrain without taking a severe troop organization hit. The left flank has thick jungles, so I buy two marine units and put them on the river line. I don’t place additional AT units beyond the one that starts there because: 1] the terrain is unsuited for armor and 2] the road hugging the coast is the only place armor could really advance. I’ll quickly move the AT unit towards the coast. 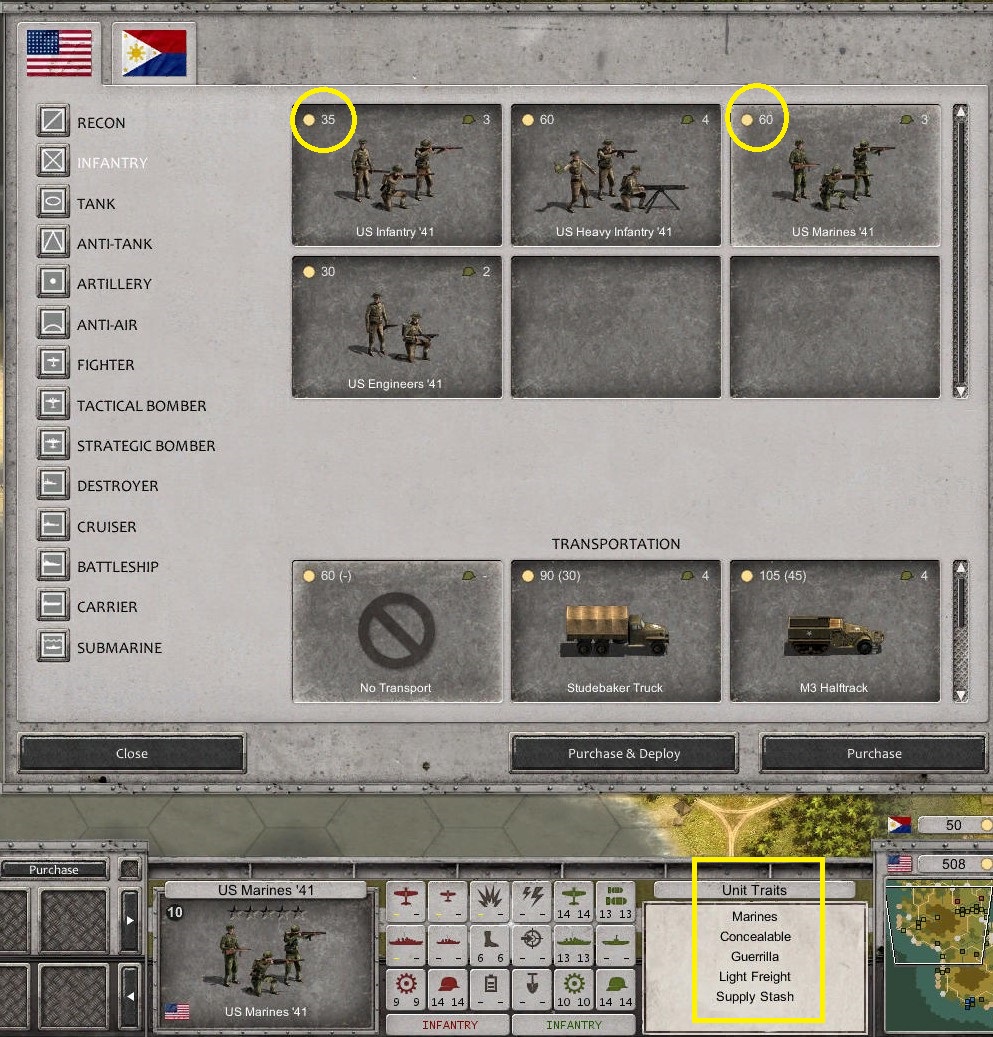 Most of my troops including my lonely Sheridan tank unit are on the right flank. I buy two AT guns for this flank to hopefully stop the Jap armor. I mount one AT gun which triples the cost. At least one AT gun must make it to the second defense line. My heavy infantry unit is on the coast road because it moves like a snail. Last, the 1 resource point commando unit has wired the bridge for demolition.

Turn 1: The Japs attack. The Jap tank on the extreme right flank was heavily damaged and retreated North of the river. The PT boats leave the harbor to protect against Jap Marine landings. The two PT boats will move NW every turn. 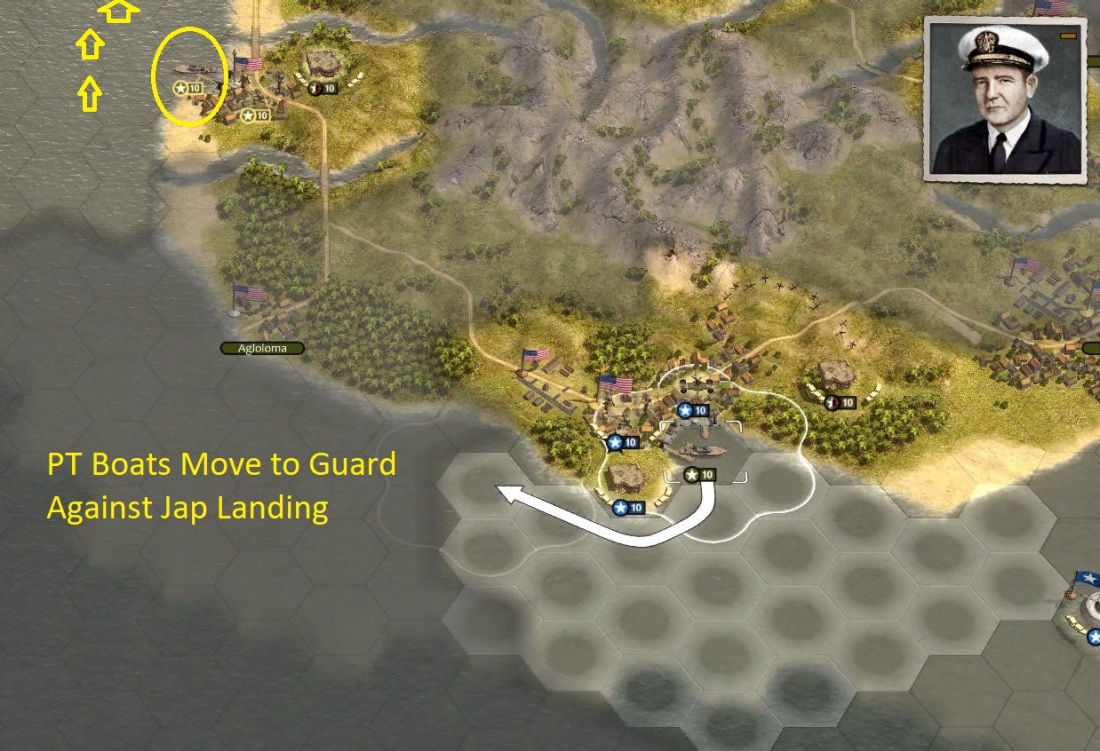 Your 3 command point US Infantry unit is destroyed on turn 3. On your next turn you can place any unit costing 3 command points or less on any city/town hex (in a one hex radius) which generates supply points. Suppose a Jap unit has broken through your lines and is heading unopposed to a victory point city. If you have reserve command points and the resource points to purchase a unit, you can deploy the 3 point unit in the endangered hex. It would be more logical if replacement units could only appear at one edge of the map – but that is not the rules mechanic for ground units.

Contrast this with naval units. Your 3 point destroyer is sunk and the 3 points return to your command point pool. A replacement destroyer can only be placed in one of the starting hexes where the fleet was initially deployed. Usually your fleet has sailed far, far away.

The ground unit reinforcement exploit is so useful, I’m keeping the three command points uncommitted. If things go south a unit can be deployed where it is most needed. 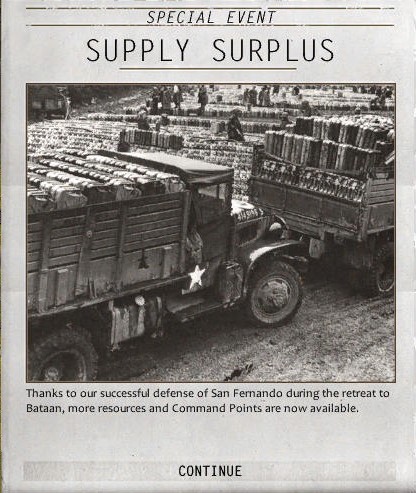 Along the river line Jap units below 8 strength points have attacked. Note the AT gun moved to support the unit on the coast road on the left flank. I’m posting a screenshot from Turn 2 and skipping to Turn 6. The Jap artillery pounds me, but behind the river I can maintain a successful defense. My static defense is successful but not visually interesting. I have just enough troops on the right flank that I can pull a unit out of the line for reinforcement and reorganization when it gets too chewed up.

The brave deaths of the Gunny and “Lt. Idiot” in the previous holding action served the greater good. McArthur bestirred himself to speak with all inexperienced Lieutenants and their Gunnys before the battle started. McArthur ordered the Lieutenants to stay behind the river lines and shoot up Japs attempting to cross. He then ordered the Gunnys to shoot in the leg any Lt failing to follow orders and counter-attacked North of any river line. The assembled Gunny’s gave a loud “Yes Sir General McArthur!” After McArthur left the Gunny’s started bragging about their marksmanship badges and taking bets on who would bag the first Lt of the upcoming battle.

Lt. Newbie told Lt. Wet Behind the Ears that the only time he had seen his Gunny happier was when the Gunny found a fifth of unopened Scotch and shared it with a “fun time girl.” 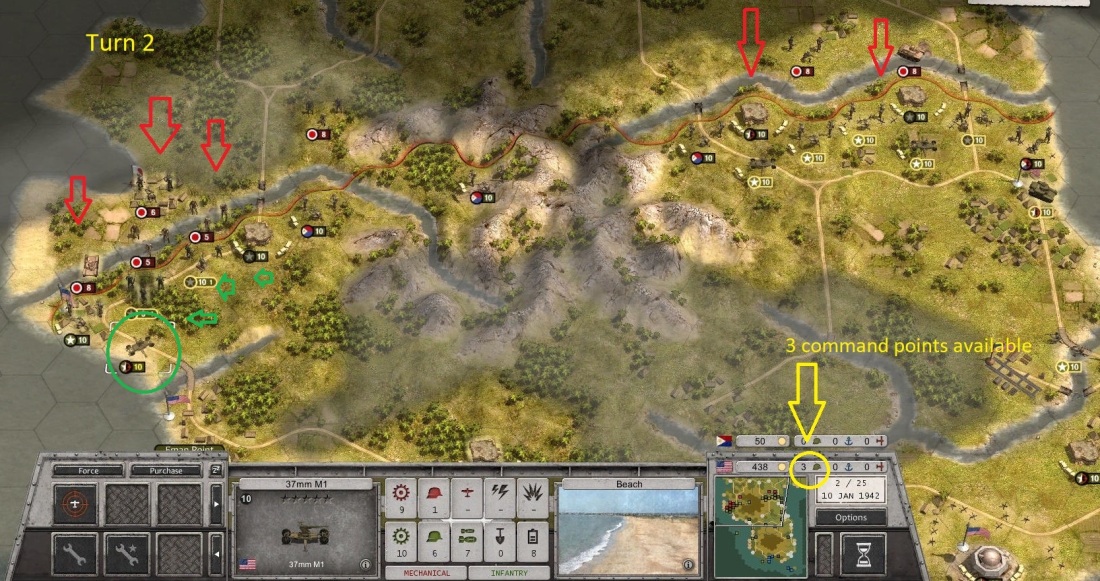 Turn 6:  US and native forces have held the river line. I’ve achieved a secondary victory condition and some troops were released by McArthur. 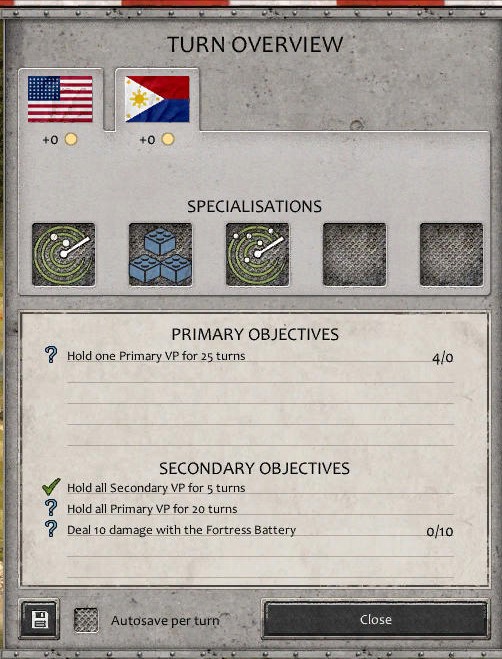 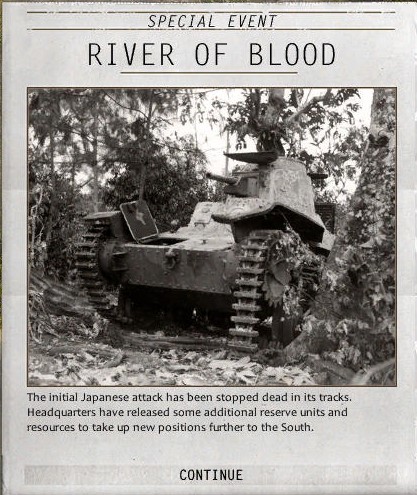 Turn 7: Jap Marines Attempt to Land Behind US Lines – Since turn 1 my PT boats have been moving NW. The Jap Amphibious Landing Force appears on Turn 7. PT boats have torpedoes which are relatively powerful but take forever and a day to reload. Knowing nothing about PT Boat operation, I imagine Gilligan is responsible for reloading the torpedo launchers. PT ship guns are relatively ineffective but can fire every turn. 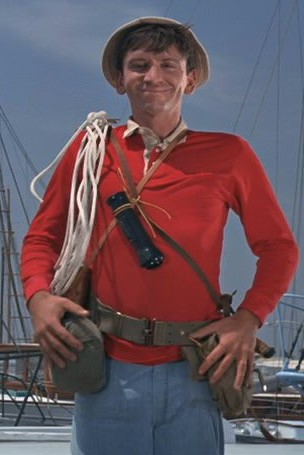 Supply is key to a successful amphibious landing. Like US Marines, the Jap Marines carry supplies for one turn. Then they rely either on a supply ship or regular supply lines. Killing the supply ship substantially ends the amphibious landing threat. I have enough troops to garrison supply line towns on the West coast when Jap Marines get into range. But resupplied Jap Marines could be a deadly threat. My PT boats launch torpedoes and kill 5 of the supply ship’s 8 health. I’ll maneuver enough troops to garrison supply cities in range of the Japs and my response force can kill them when they go out of supply – if I can sink the supply ship. 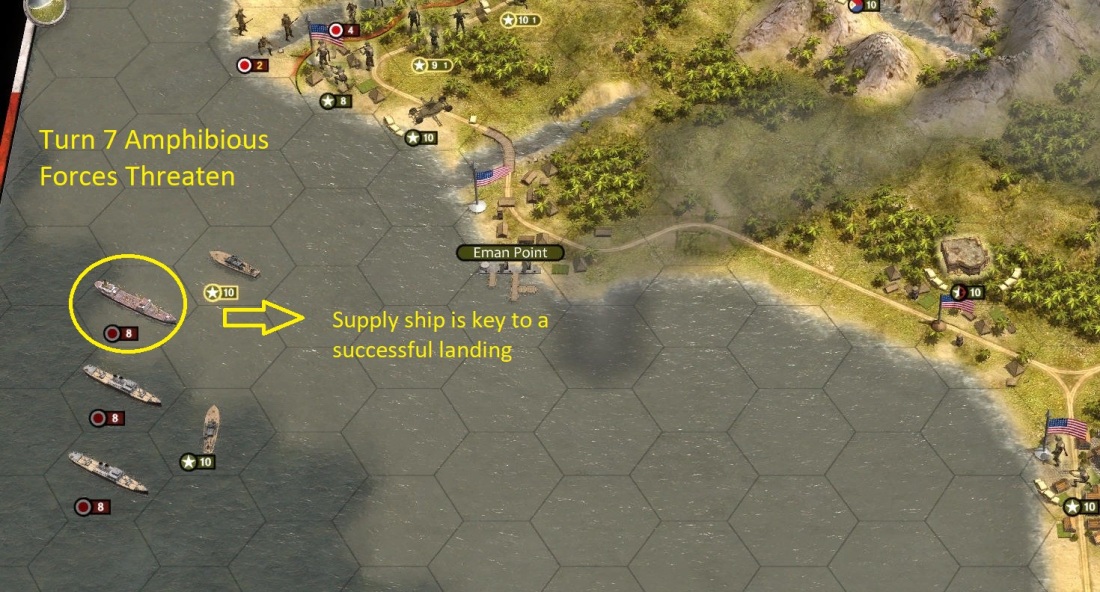 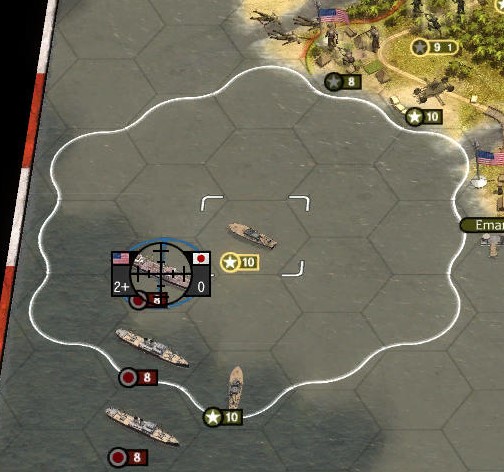 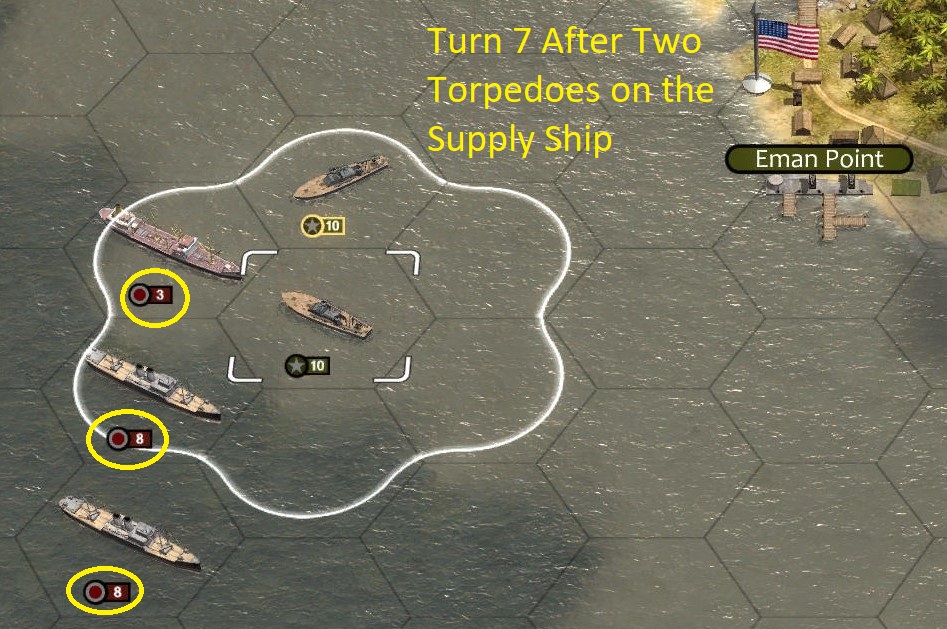