Turn 16 & 17 – Mopping Up and Moving West – US Marines crushed the Jap counterattack with the remnants getting mopped up. Seven Marine Units are far away from the front lines moving West. It will take a couple of turns for them to move to the front.

Two Marine Units made the final amphibious landing. They were heavily bombed but a Lockheed Lightning is attacking the unescorted Jap Bomber. After the initial turns, all of the advanced amphibious landings moving westward were initially out of contact with the main body of Marine forces.

Rendova Island was secured on Turn 17. The three victorious Marine units will reembark on their landing crafts and slowly move across the bay to rejoin the main force at New Georgia. Marines only reembark at docks, so only one Marine unit will get on landing craft per turn. 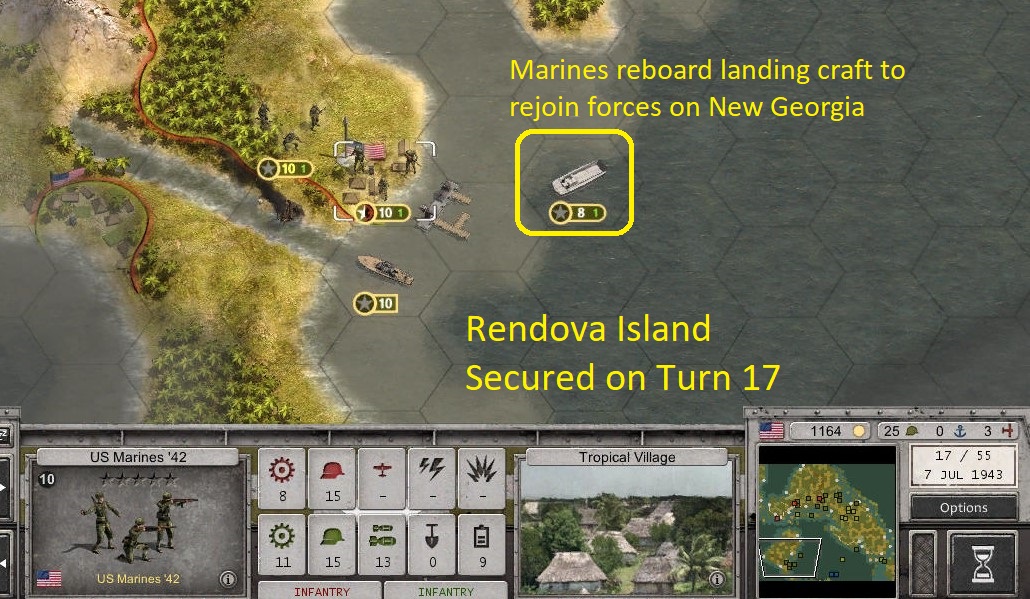 The Marines eliminated the last organized Jap Resistance on the Eastern part of New Georgia. The Marines are ordered to seal off the Northern part of the island and reunite scattered forces to attack the main Japanese force on the West end of New Georgia. So far, the master strategy has worked. Once the troops are united with lead elements I’ll start landing massive reinforcements including heavy artillery on New Georgia in supply and close to the main body of Japanese troops. 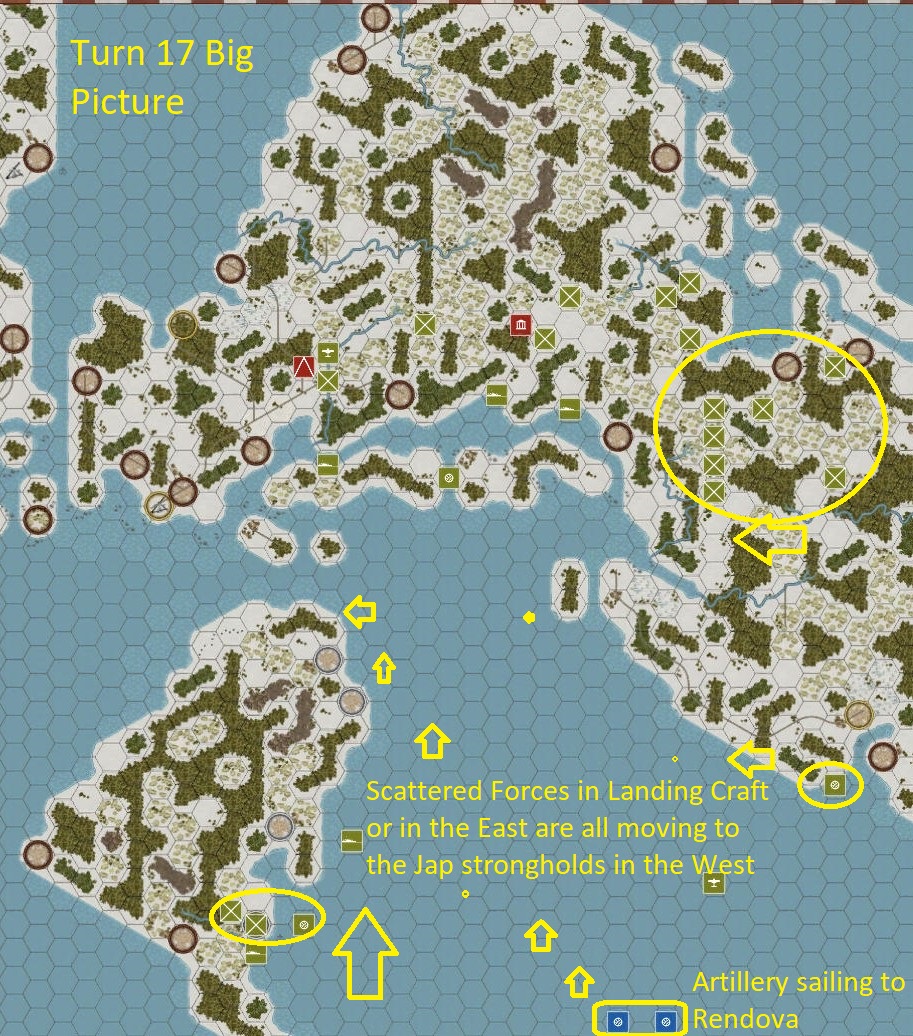 Turns 20 & 21 – Reinforcements with Heavy Artillery Support Attack – As the Marine force reunites large numbers of reinforcements are landed and attack the Japanese main force. Marine heavy artillery and light tanks are deployed. Landing either before now would have accomplished little due to horrible terrain which would have disrupted supplies and combat effectiveness. Blocking forces are securing bridges and river crossings to the North to prevent Japanese reinforcements. Only a couple of Marine units are in position to attack the Japanese in the West. But these attacks are successful due to heavy artillery and destroyer fire support.

The Rendova Island force is slowly making its way North across the bay. Heavy artillery (under AI Control) moves slowly towards Rendova’s North Coast. Rendova Island artillery deployment is so slow that New Georgia targets will be limited. 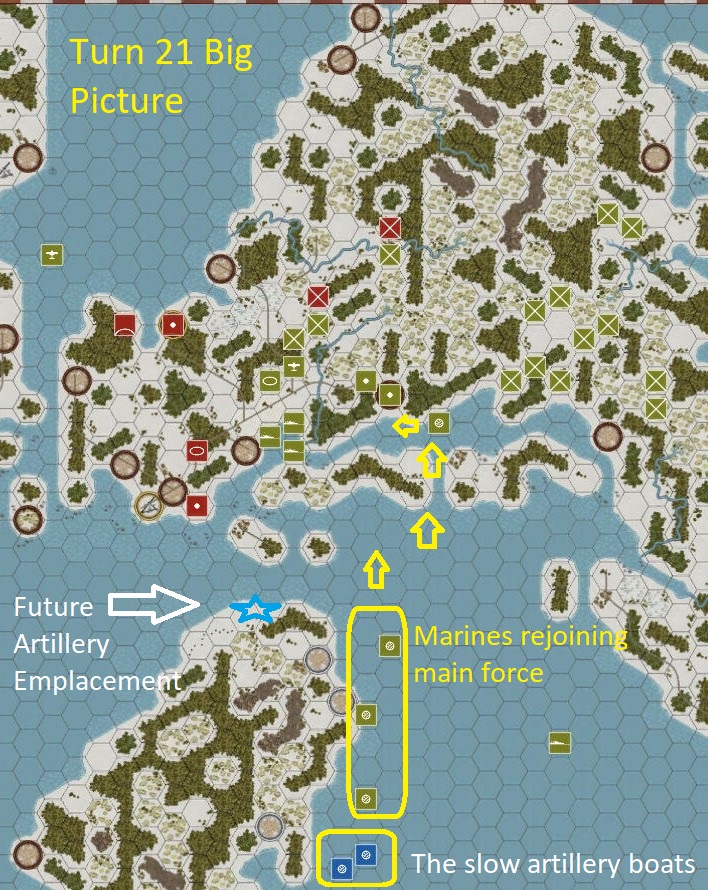 Turn 24 – Marine Assault on Main Jap Force Begins in Earnest – Turns 18-23 were mostly the long Marine march through the jungle, mountains and rivers of New Georgia. Heavy artillery landed on New Georgia has most of the Eastern part of the island in range. Rendova Island heavy artillery can hit the South Coast of New Georgia. Japanese reinforcements from North New Georgia are blocked. The main body of the Jap defenders are engaged by supplied, rested Marines with massive artillery support. Firepower is the difference between a costly slug fest and attacks on weakened, shell-shocked remnants of Jap Forces. 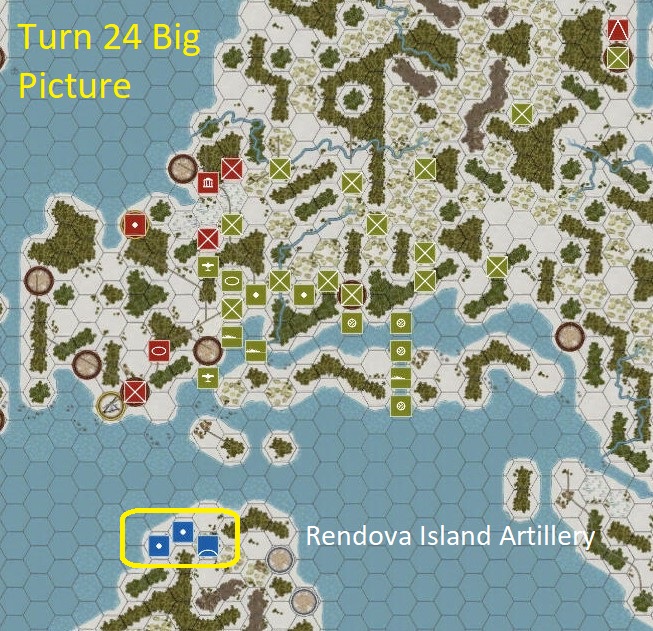 Turn 26 to 28 – Blasting to Victory – Behind massive artillery barrages, Marines slowly move towards the last New Georgia victory hexes. I’ve got lots of time, tremendous artillery support, and lot of reinforcements arriving so no need to take casualties to quicken the pace. My plan is to take Munda airfield which would allow my dive bombers to engage defends at the last victory hex. 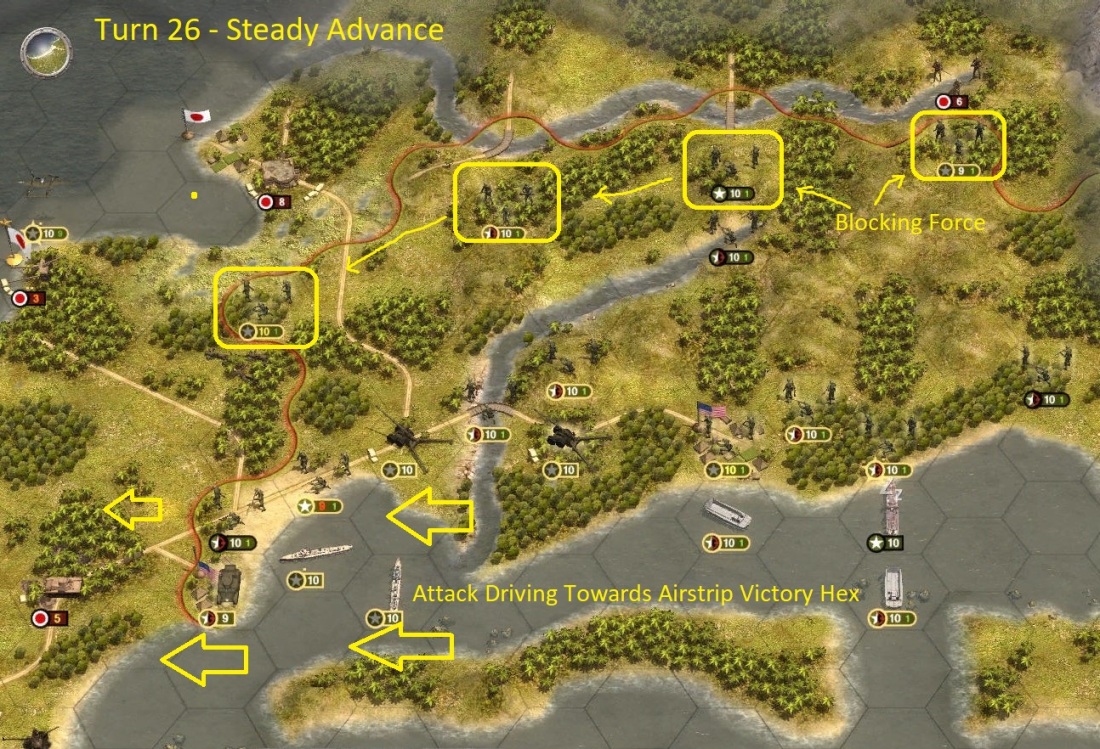 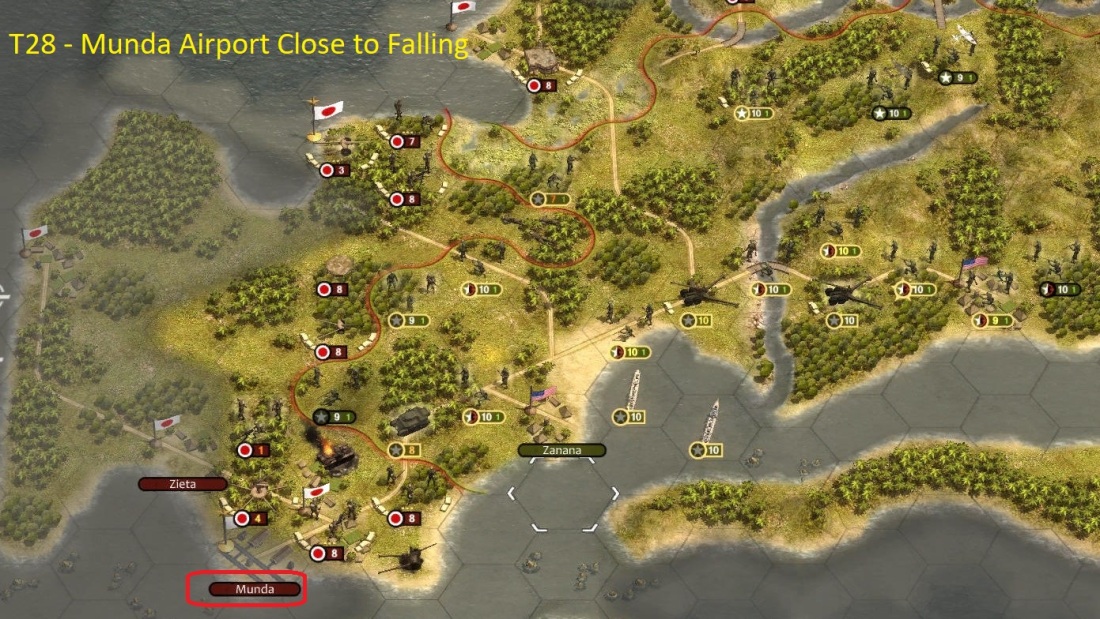 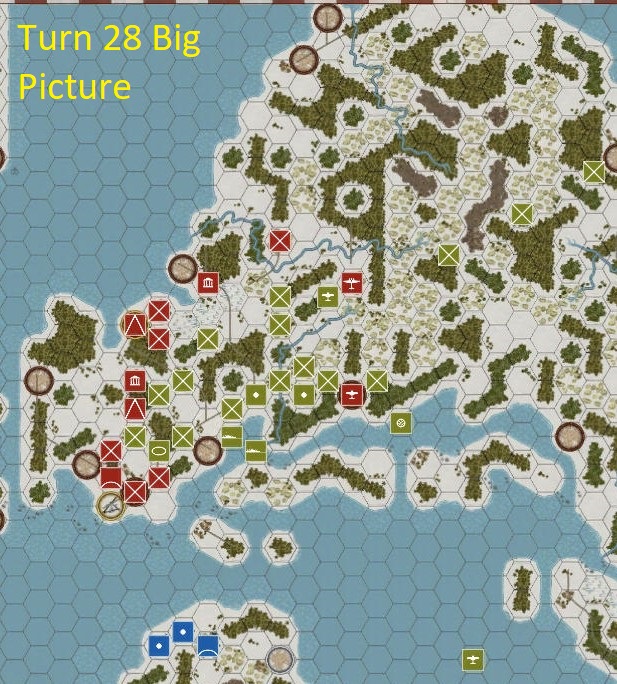 An air war raged during the battle on the Eastern part of New Georgia Island. I’ve mostly omitted it. But the US player needs to deploy Lockheed Lightning fighters for two reasons. First, they have huge fuel tanks and can stay in the air a very long time. This is essential given the distance to your airfields for most of the battle. Second, the Lightning has the best ground attack of any fighter available to the US player which makes the Lightning useful on almost every turn. The screenshot shows a pair of Lightings sinking a Jap troop transport attempting to reinforce defenders of the last victory hex. 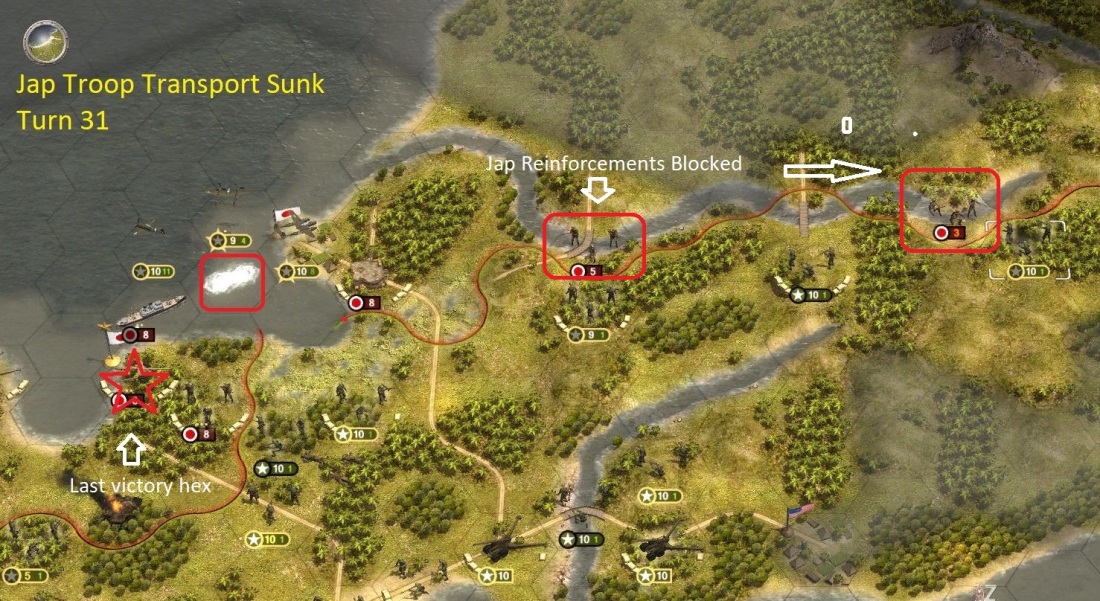 Turn 33 – Victory! – The last victory hex falls on turn 33! This was accomplished 21 turns early, with minimal casualties, and builds up a massive surplus of military reinforcement/replacement points making the future scenarios a lot easier to win. I’ve played this scenario at least a half a dozen times refining this strategy and it works – at least on this difficulty level. I took the advanced aeronautics technical advance before the Philippine Sea scenario. 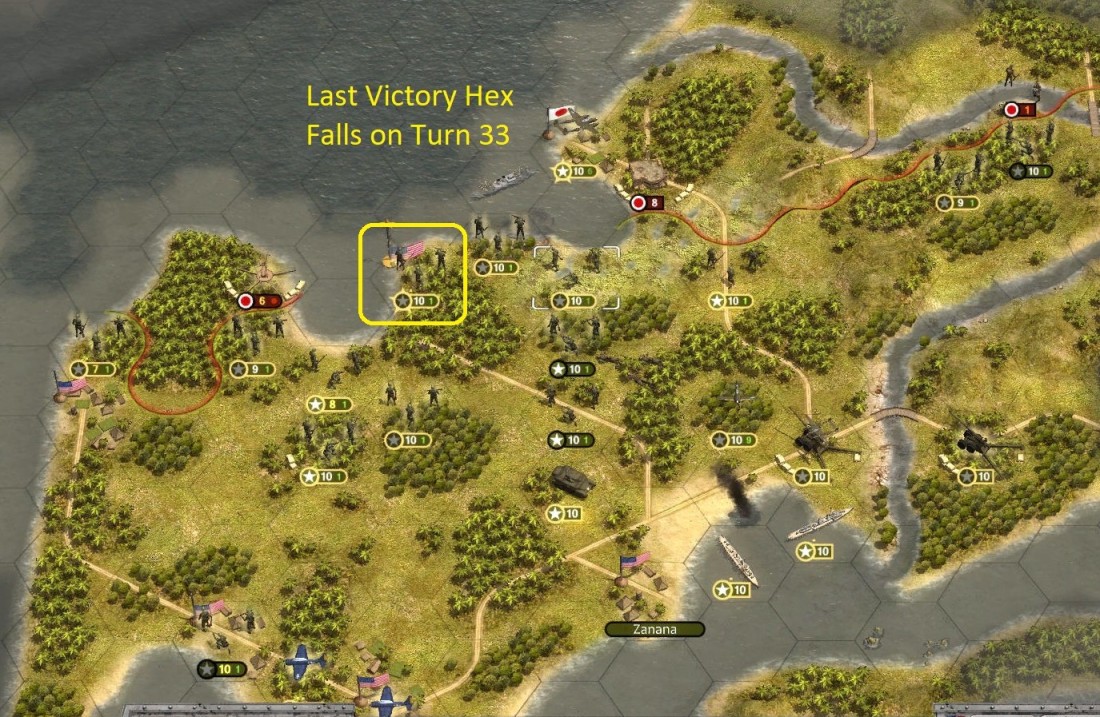 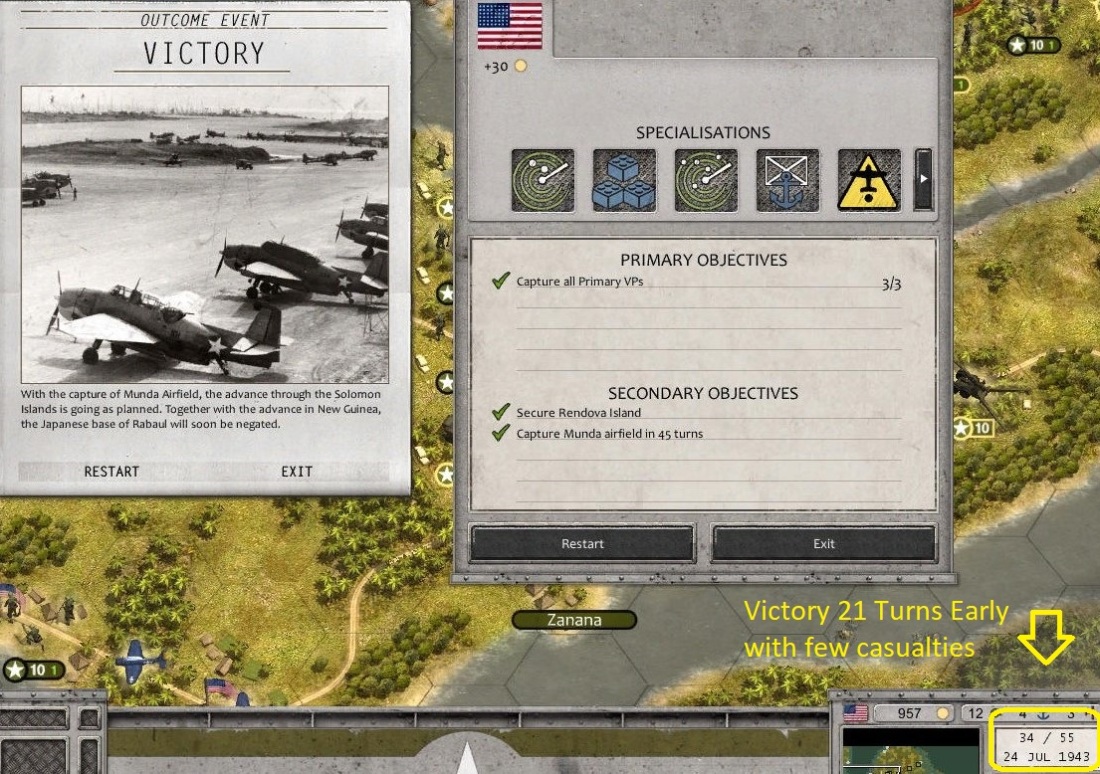