Last Major Imperial Japanese Navy Attack – Two huge IJN fleets are spotted sailing towards ships supporting the US landing on turn 17. Three Battleships are the core of the Western Fleet with 2 BBs in the Southern Fleet. The battle and the war are lost if these fleets can sink 4 support ships under AI control (marked blue on the overview map). With no carriers the IJN must close to naval artillery/torpedo range. 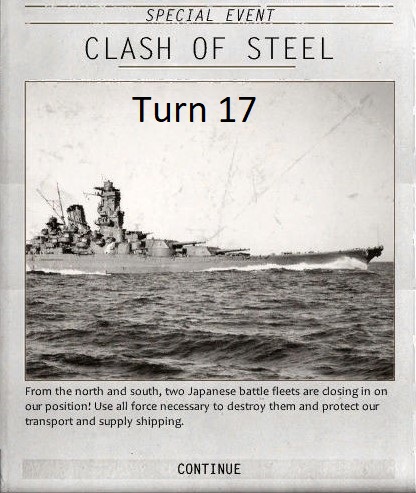 Concurrently the US gets substantial naval points to deploy fleet units – but no aircraft beyond three outdated squadrons attached to the Baby Flattops (escort carriers) in the Western Fleet. Reserve surface ships were enough, so no fleet elements were purchased. The US surface fleet has less firepower than the Japanese, but many dive bomber squadrons. Two Fleet Carriers are on station. 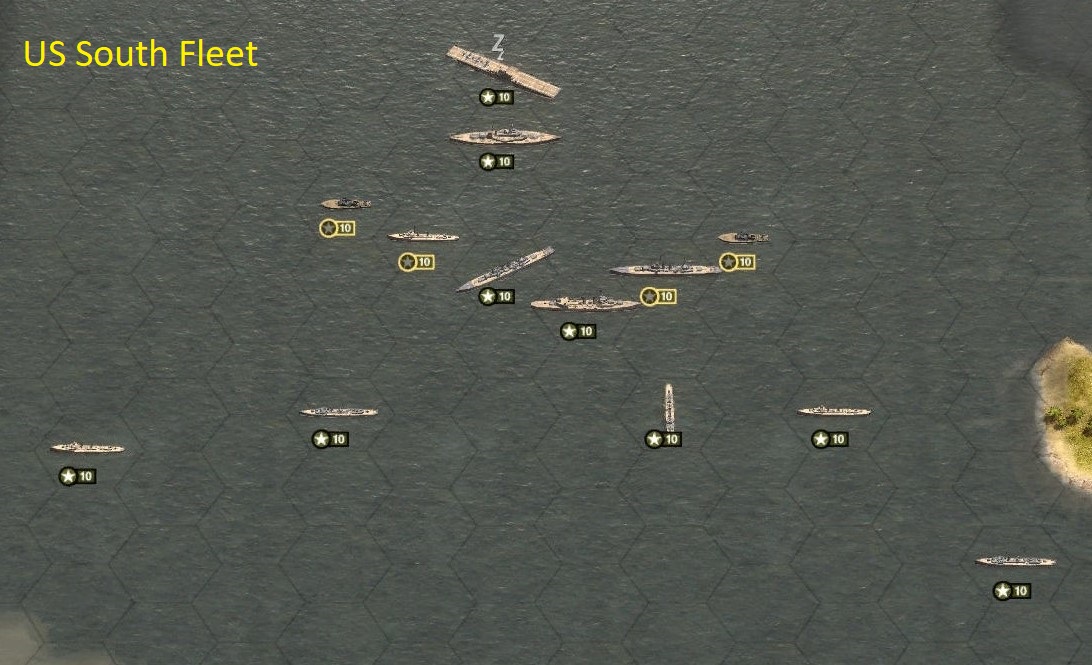 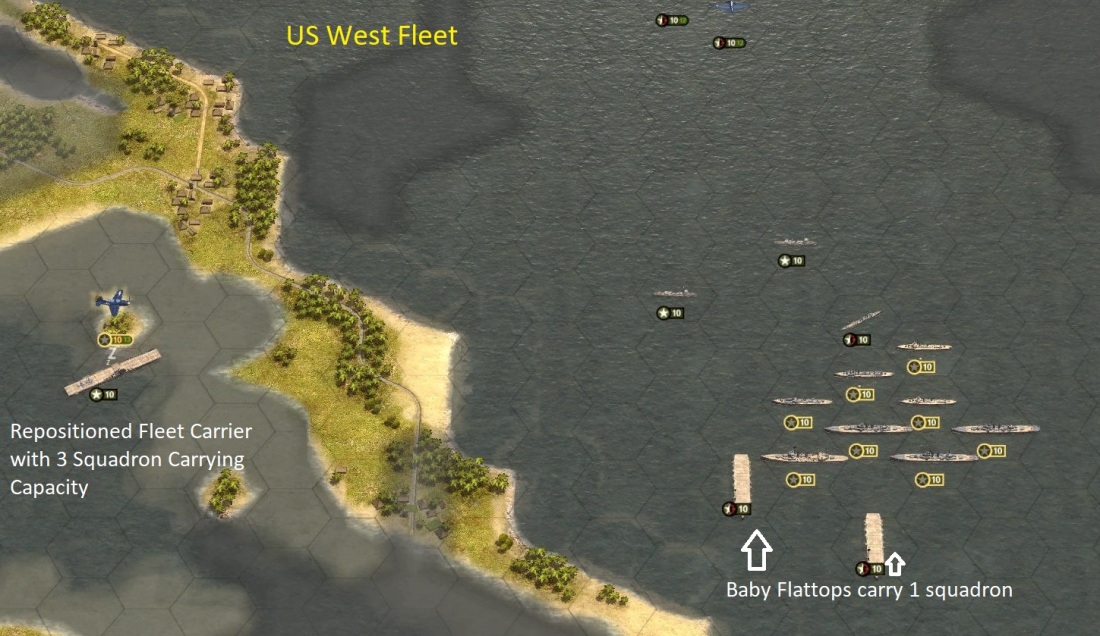 Both US Fleets withdraw at full power to give the dive bombers maximum time to savage the Japs. 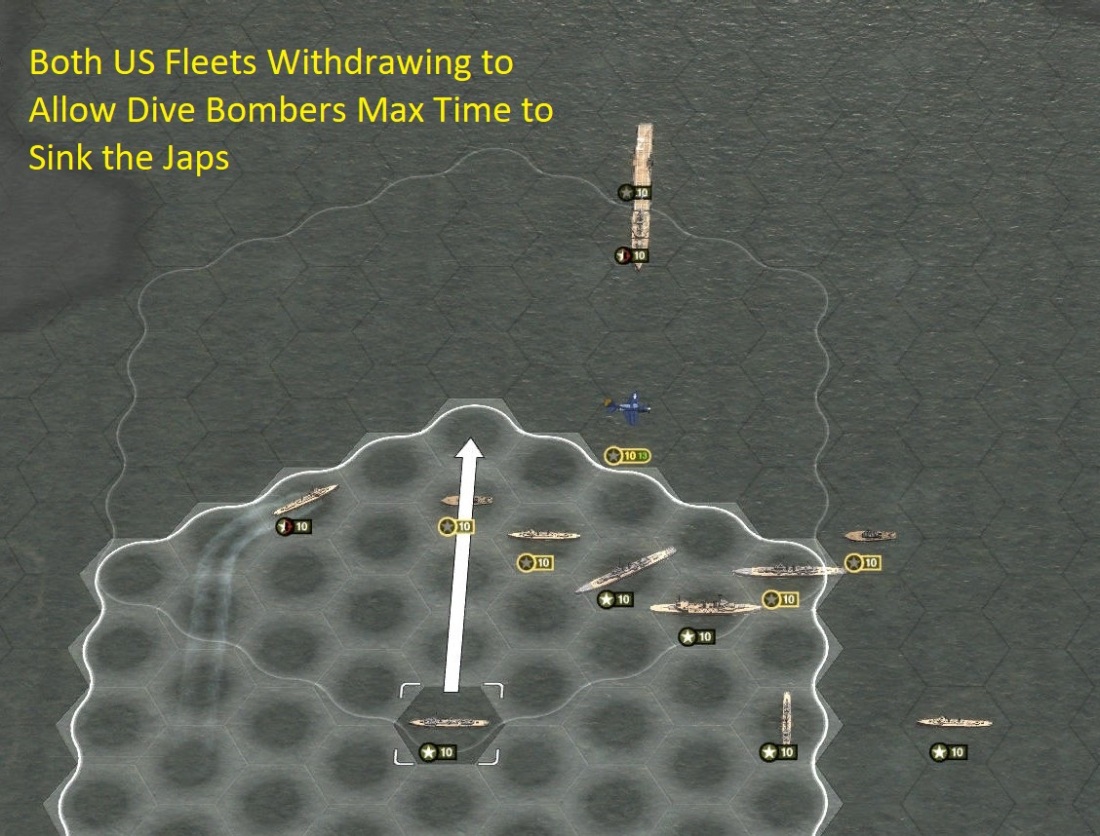 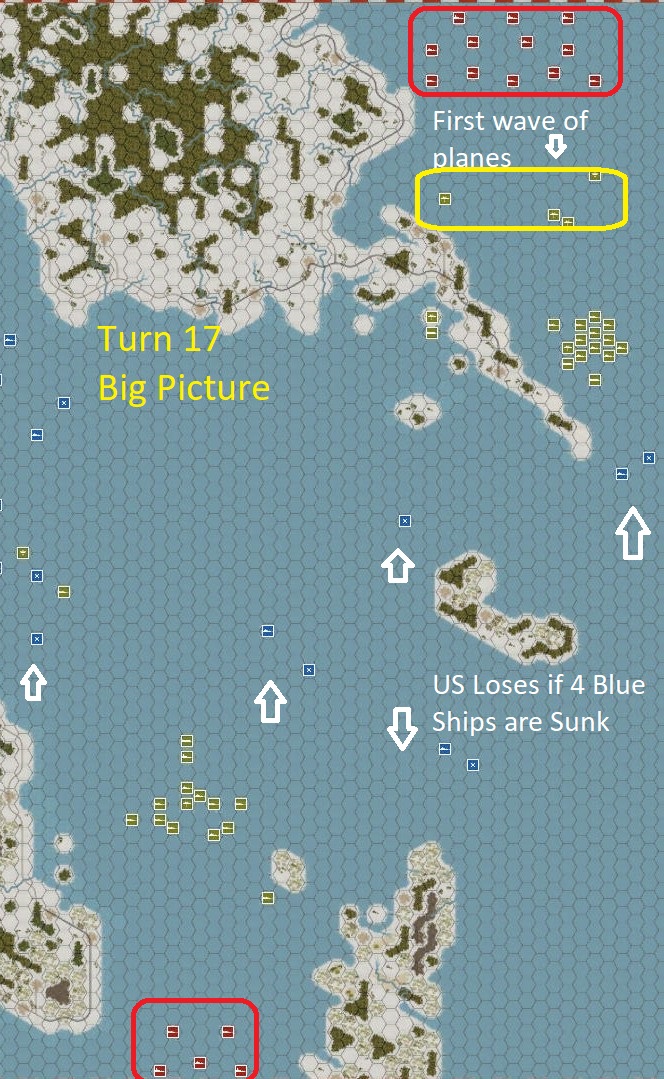 Many Destroyer Squadrons Sunk While Land Forces Advance! – Both Japanese Fleets suffer major losses as dive bombers target the destroyer escorts. The destroyer squadrons were targeted to reduce long-lance torpedo attacks and enemy fleet scouting range. By the end of turn 20 most destroyers were sunk. 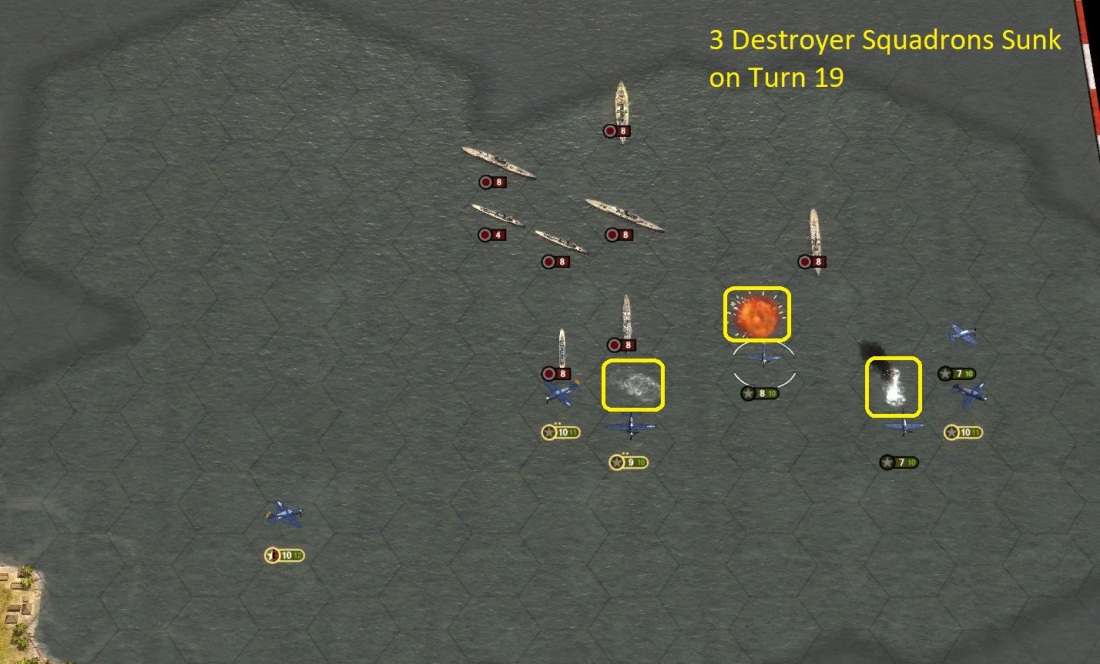 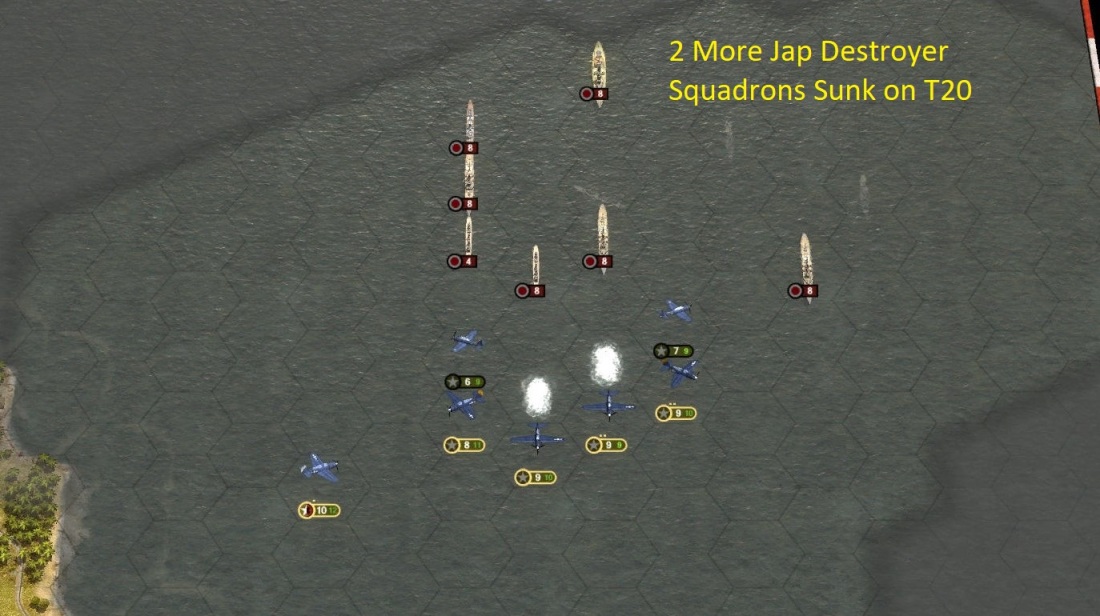 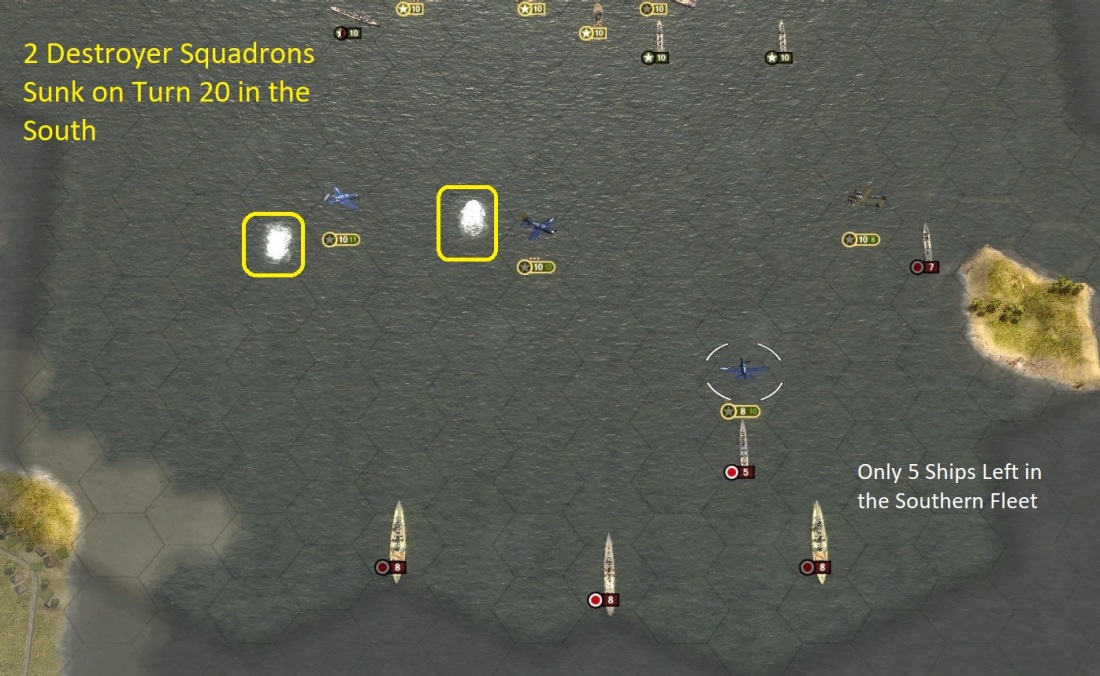 US Marine and Army units backed by substantial armor and heavy artillery continue advancing towards the last victory city on the far West Coast.

Unexpectedly, two units of Japanese Paratroopers were spotted on transport aircraft. Since US forces have total air dominance, they won’t survive long enough to make their drops. The overview shot shows the distance the IJN fleets must sail to reach the defending US surface fleets. 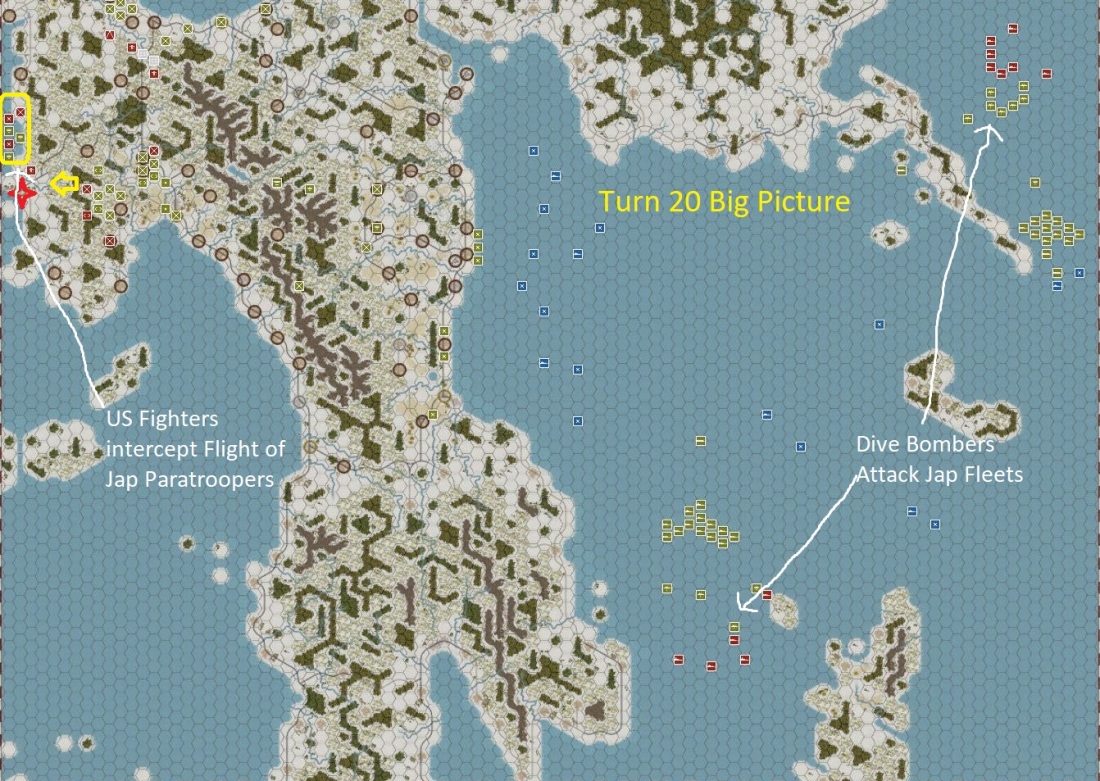 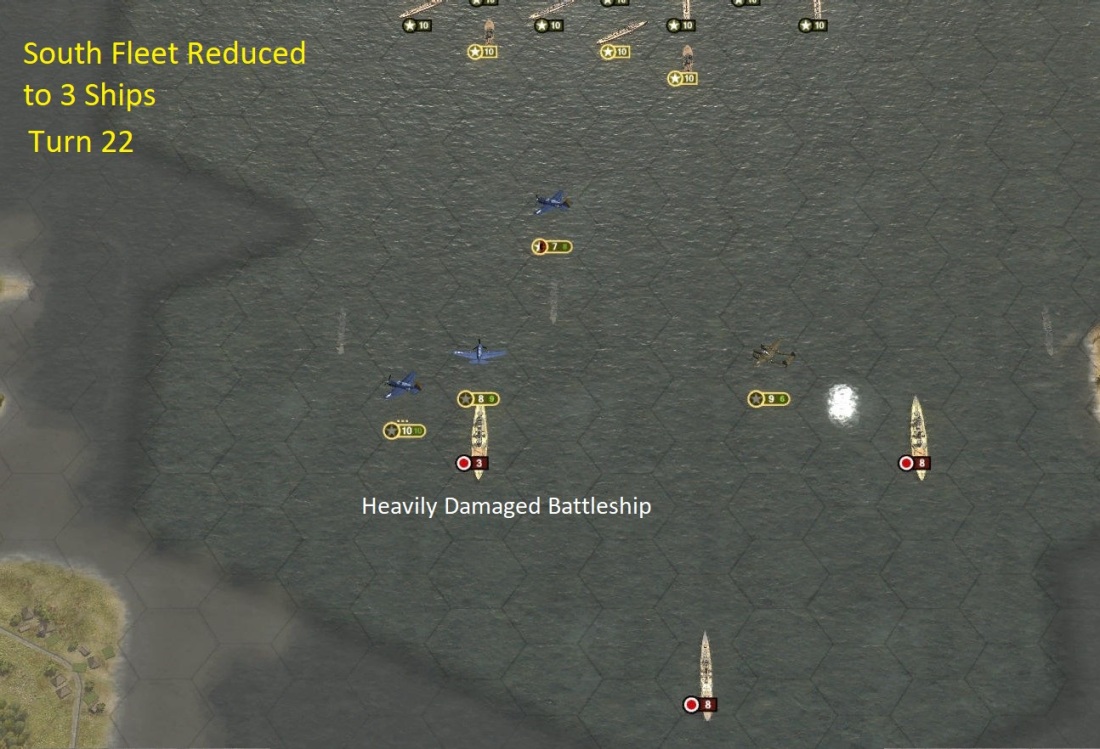 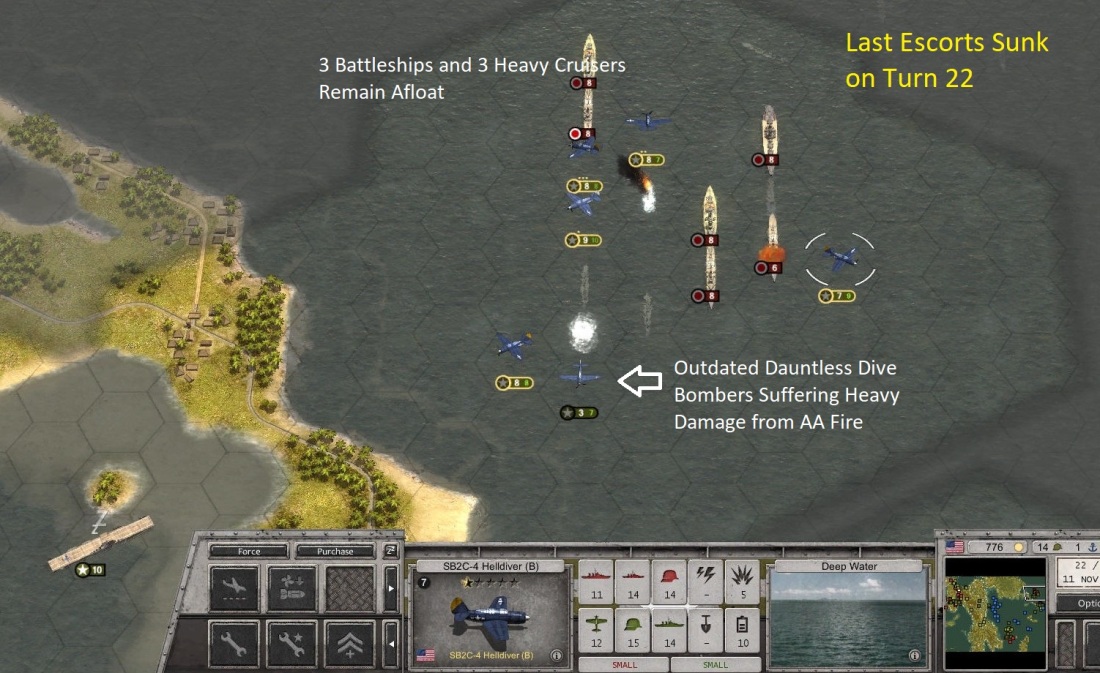 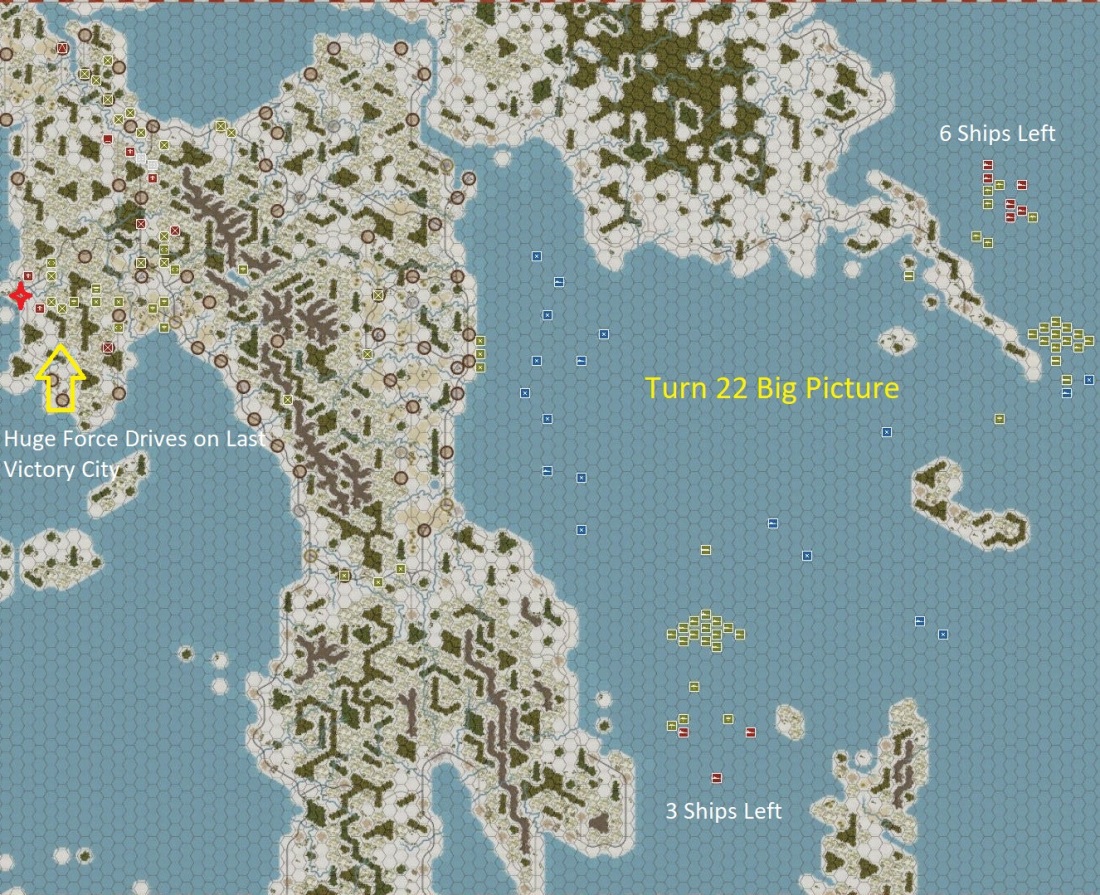 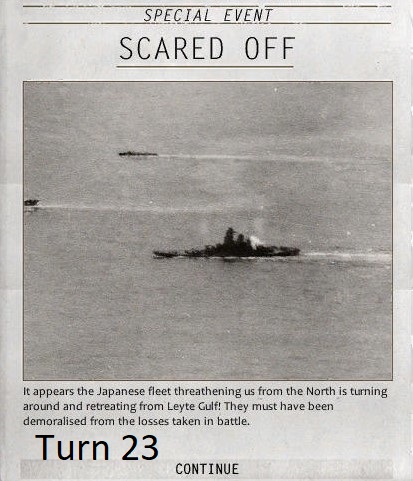 Last Advance in the Philippines – General Wrigley takes the stage at what he hopes is the last general staff briefing. “Fellow Officers, I know many of you were grumbling when your Navy dive bomber support was withdrawn. Since those Helldivers reached their repositioned carriers in the nick of time to sink the Japanese Navy targeting our supplies, hospital ships, and transports – I’m sure you will now agree with the Admirals’ decision to reposition those squadrons. The Navy is having outstanding success against both Japanese Fleets and our supply ships are safe. Still, we will not have dive bomber support for the rest of the campaign. Our massed heavy artillery means we probably won’t need it.

Our Marine, Army and Armored forces are about a week (two turns) away from capturing the last objective. Well Done!

On a sad note, doctors have informed me that this is my last campaign. I’m worn out and am unlikely to make it into next year. The Doctors also inform me that I’m a Schnauzer mongrel and am unfit mentally and physically to command troops – although I boost morale whenever I’m seen. Regardless, I’m sure that historians will think that it is very silly for someone to put a dog in command of forces simply because they were looking for a General’s name.”

[Like many, I name characters in RPG and wargames after things that make me happy. Wrigley will be 16 on December 7, 2019 if she makes it that long. Her health is rapidly failing. We lost Sgt. Zippo last year to old age. But new recruits Panzer and Dash have joined the ranks].

General Wrigley led a successful ground campaign capturing the last victory city on turn 24 and achieving victory on turn 25 – a full 25 turns ahead of the deadline. She (yes, when she was forced to retire by reactionary elements in the Pentagon) was discovered to be both a canine and female.

PS – no disrespect is intended to those in my father’s generation who fought in the Pacific. Many never returned. Many who did return bore visible wounds and less visible horrible memories. 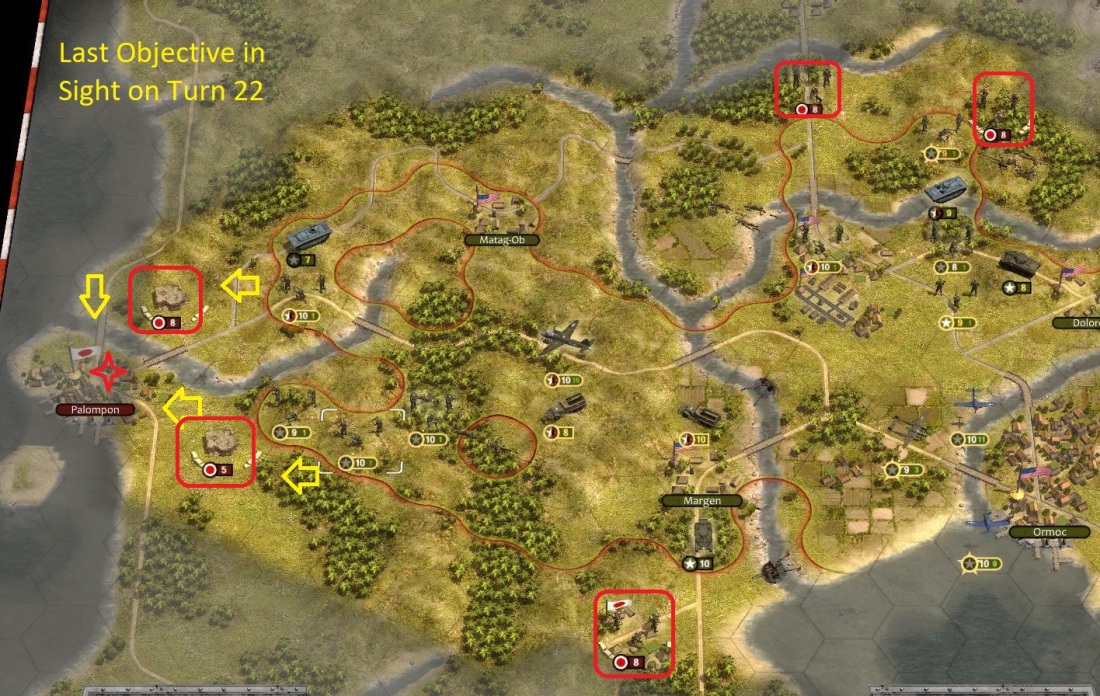 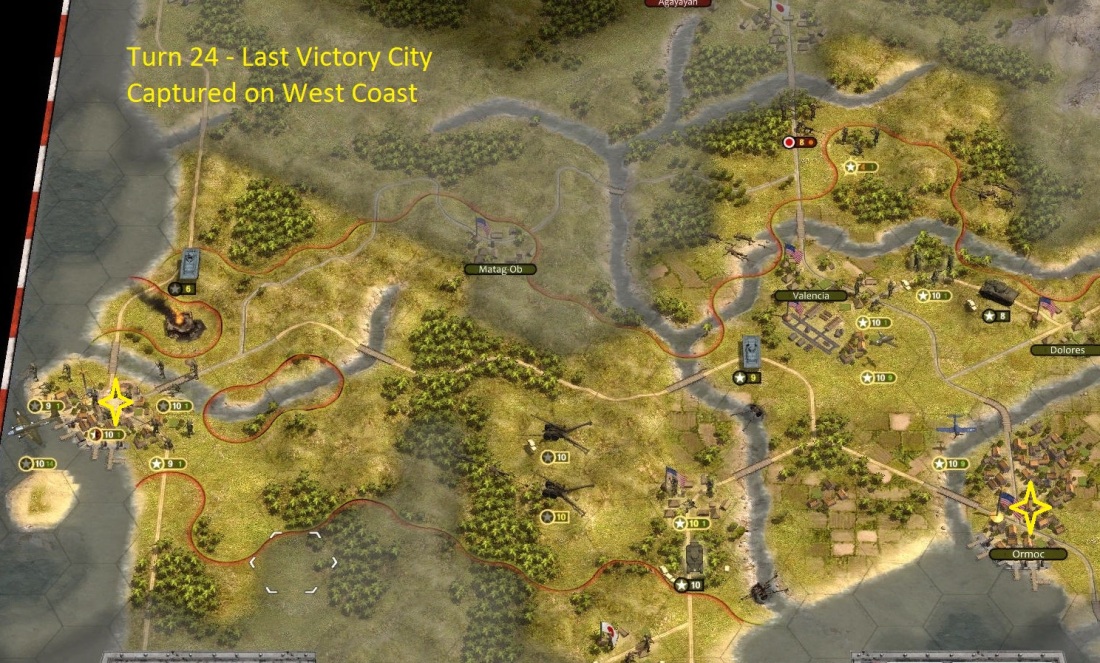 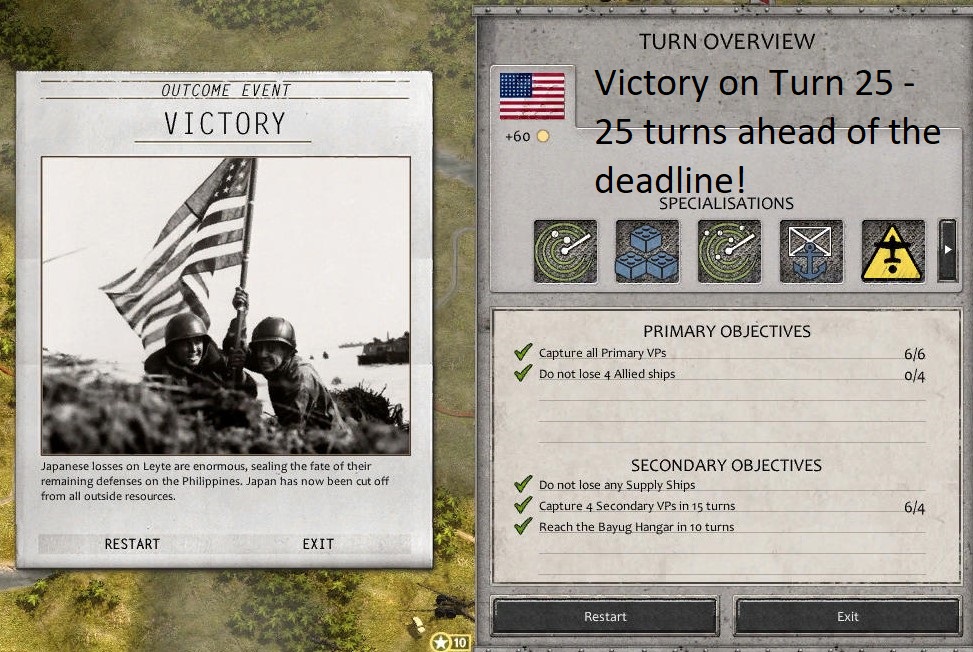 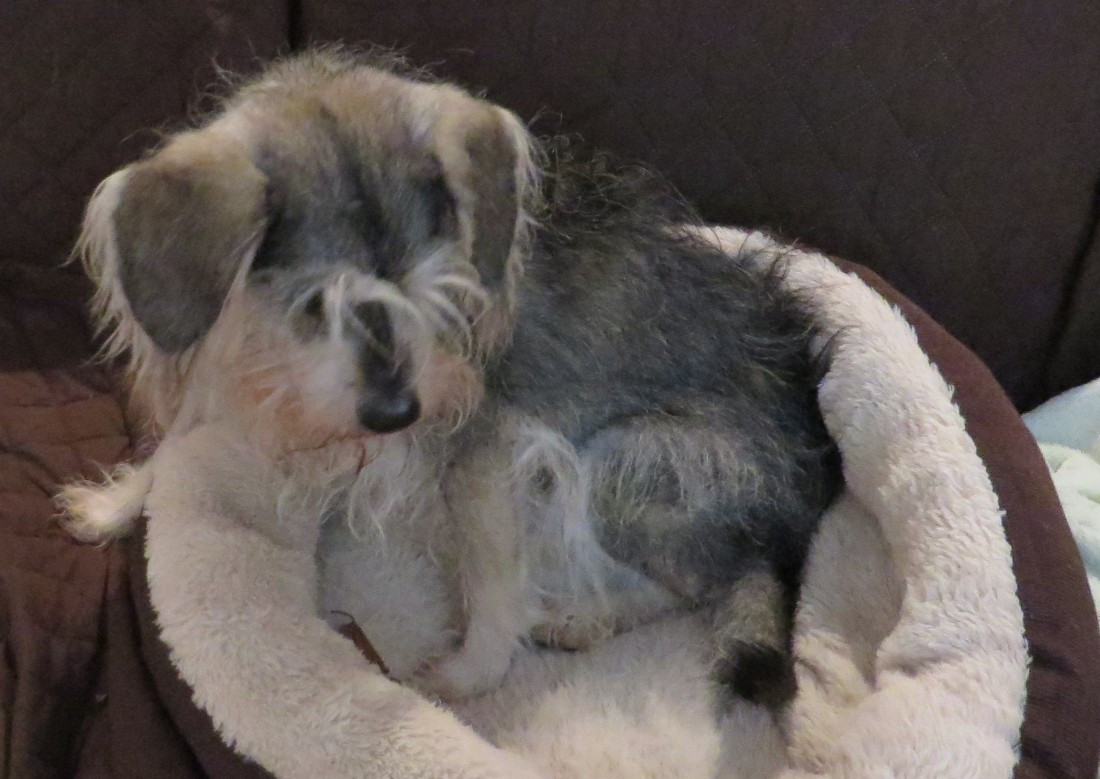