The Okinawa scenario starts with the US Army and Marines established onshore in a position that cuts the island in half. The Japanese did not oppose the landings and some US Marines sang when they walked away from the beachheads.

I’m listening to E.B. Sledge’s “With the Old Breed” currently. Sledge’s book about Marine infantry combat in the Pacific during WW2 is a classic firsthand account of combat. He got two degrees from Auburn University after the war and became a College Professor of Biology in a small Alabama University. His effects are at the Auburn Library: http://diglib.auburn.edu/collections/ebsledge/about.html

Weird fact, I read his book the first time by checking it out from the library as a professor. The copy I checked out was a first edition with a handwritten preface by Sledge to Auburn. After I read it, I told the librarian in charge of restricted collections that this should be added to that section and taken out of general circulation.

Sledge got though Okinawa and Peleliu without a physical wound. He lost 30 pounds during Okinawa and suffered mentally from being one of the very few men of his unit who did not die, get injured, or be evacuated for incapacitating insanity. The photo below is after he has showered, shaved, and gotten a clean uniform very soon after the conclusion of the Battle of Okinawa. Notice how gaunt he is due to weight loss.

Objectives:
You must take five primary objectives to avoid defeat. Four are in the South and one is in the Far North. The North has heavy tree and jungle coverage. The South has more roads, rivers, and open terrain. Your secondary objectives are capturing all of the airfields in 25 turns, taking Suri Castle in 20 turns, and eliminating all cave openings. All airfields save one are in the South. Suri Castle is in the South. The cave entrances are unknown to the Marines. The map marks all known objectives.

I’ve concentrated all Naval elements save one cruiser in the South. All dive bombers and Lockheed Lighting Fighters (useful in ground support) are also initially tasked to the South. My primary air defense fighters are initially disbursed since I do not know where the Japanese air force will appear. All heavy artillery is positioned to support the advance South. A supra-majority of my troops are moving South. If I guessed wrong, I can quickly redeploy my dive bombers to the North. Troops could get to the battle line in the North in three or four turns (at the start). In sum, almost all of my combat power is directed to the South. 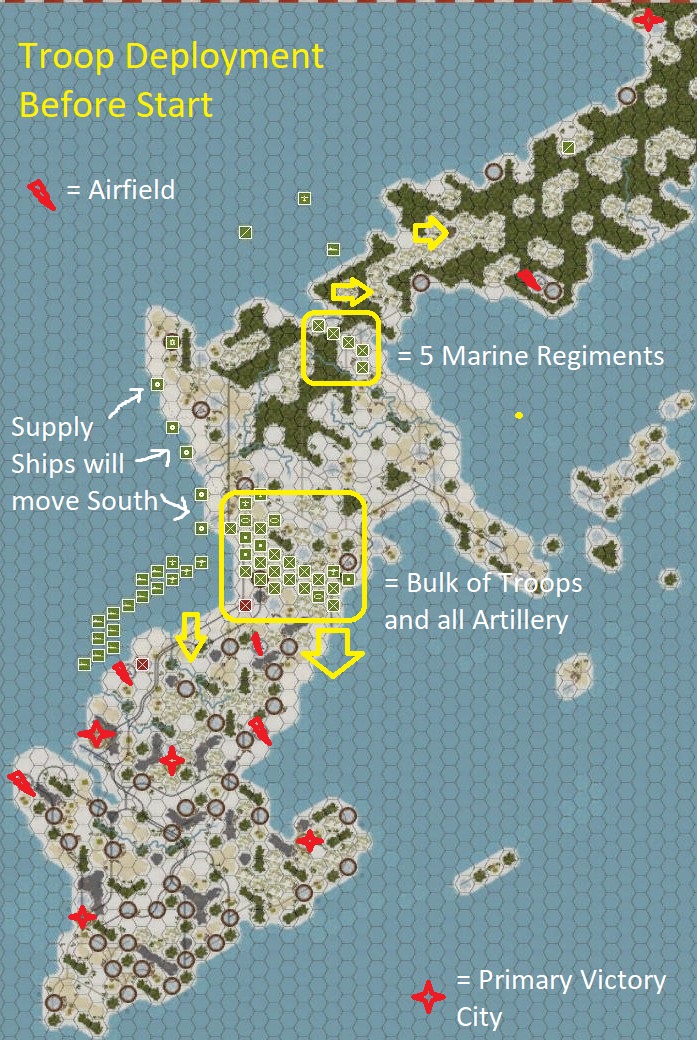 Suicide boats and planes immediately start appearing. They are quite deadly. One suicide boat did fifty percent damage on a PT-Gunboat. Suicide aircraft are all coming from the North so most of my fighter coverage is directed there. The suicide gunboats are not spotted until you get close to them – which means my PT boats and a few destroyers must act as scouts. 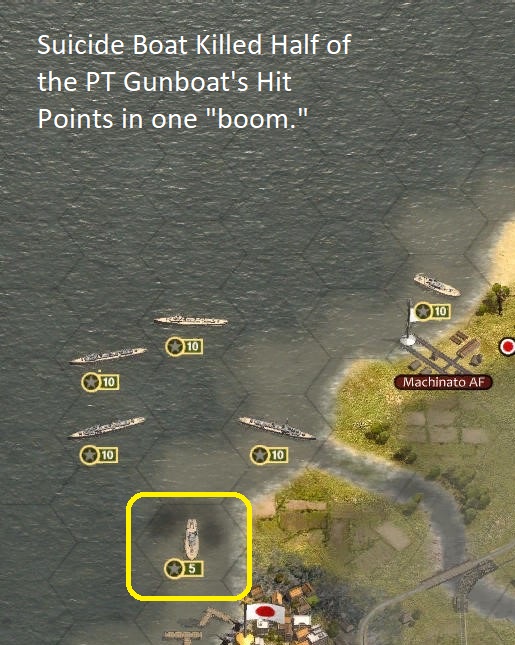 I have so much firepower in the South that my forces are steadily advancing despite heavy opposition.

Turns 2 and 3
On Turn 2 I get a flash warning that the Yamato and escorts are heading towards Okinawa. I’m forced to start moving some of my ships including all aircraft carriers to the North. I’m going to let my dive bombers continue to work the Jap infantry in the South until I spot the Japanese Navy.

I hit very light opposition in the North with my slow advance due to heavy vegetation. Heavy opposition in the South, but the massed firepower is yielding a steady advance with no significant counter-attacks. No kamikaze aircraft have managed to break through my fighter screen. 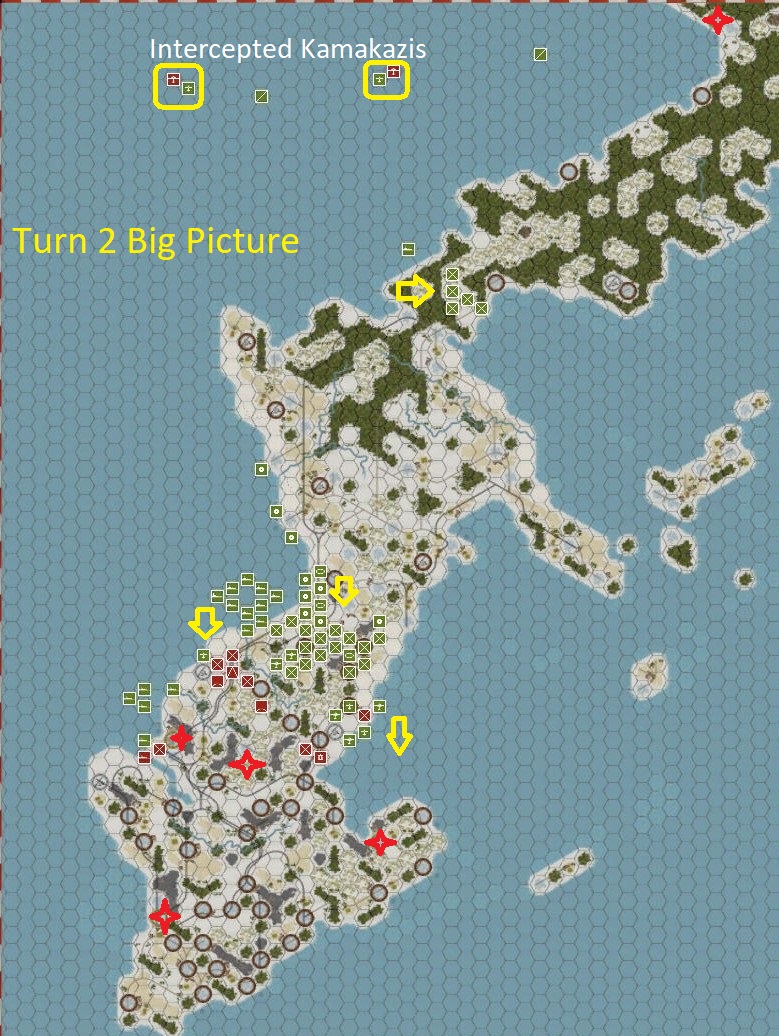 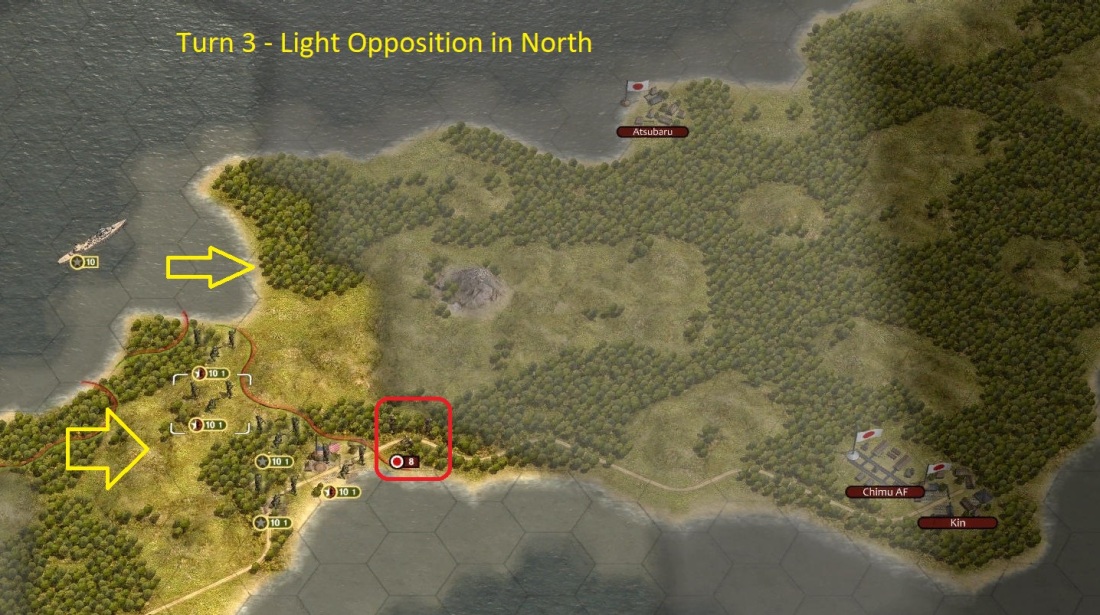 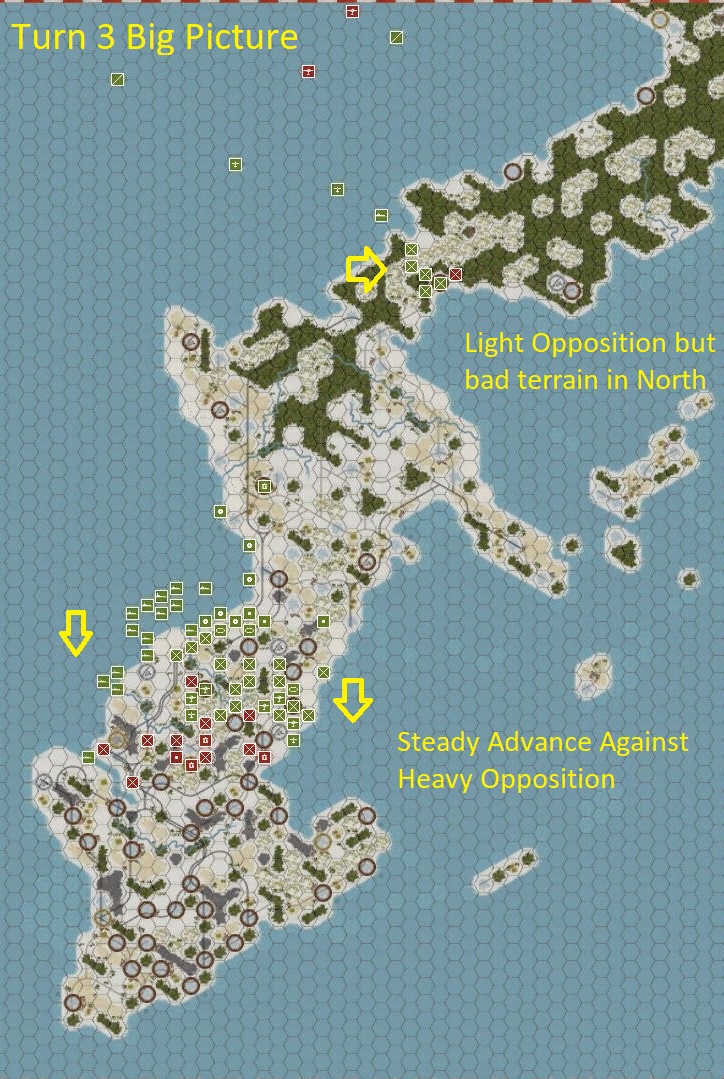