The US player must capture two hexes to win the final scenario: The Imperial Palace and a Port at the far north of Tokyo Bay. Three staging areas are available for your troops. The first is off the coast South of the Imperial Palace. The second is off the East Coast and the third is in the South off the tip of the peninsula.

I’m concentrating my forces to maximize the effect of US dive bombers and Naval shore bombardment. Concentrating in the South also gives a sea route to the entirety of Tokyo Bay and both victory hexes. 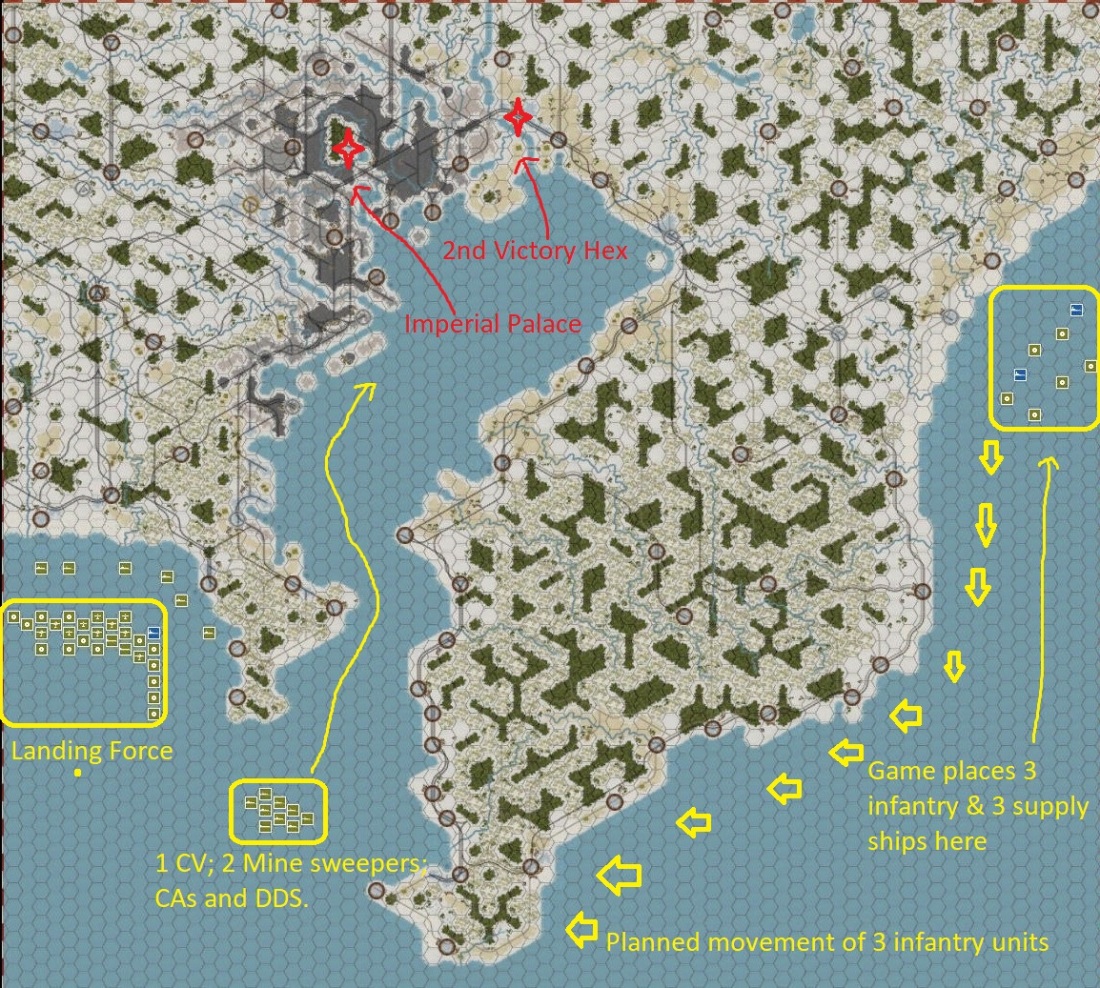 All Marine units are upgraded to 1945 equipment.   All fighters are upgraded to Corsairs or better. I’m expecting Tokyo Bay to be heavily mined so I’m purchasing two support ships which have mine sweeping capability.

Last, I got a nuclear bomber for completing the nuclear research. Nukes destroy everything where they go off and in a one hex radius surrounding the explosion. Effectively they are very small tactical nukes with no residual fallout. They operate almost like a magic user with a super-fireball spell with no lingering effects.

The initial attack wave are all US Marines with one Engineering unit for potential mine removal. This is about 50% of the troops I have command points to employ.  I’ve found it better to use Marines in amphibious assaults and land US Army and Artillery in towns after the beachheads are secured.  Army and Artillery units are disorganized when landed amphibiously taking several turns without movement to reach maximum combat effectiveness. Marines are close to 100% fighting ability upon landing.

D-Day Tokyo
US Dive Bombers and US Naval Bombardment attacked visible targets for two turns while the landing boats moved towards the beach. The first wave of Marines landed on turn 3 to minimal opposition. On D-Day +1 the Peninsula is severed and US Marines are on the outskirts of the first airfield.

By turn 5 three Marine Units have been assigned to mop up isolated Japanese forces on the Southern Peninsula with all other Marine units pushing North. The Naval Strike Force with one attached carrier are steaming North into Tokyo Bay.

North Towards Tokyo – Turns 6 – 10
The Japanese armor counter-attack had no success. The US has total air superiority and the swarms of dive bombers clobber spotted targets. The US fleet sailing into Tokyo Bay encountered minefields and suicide torpedo boats. Suicide boats usually get hammered by naval gunfire before hitting a target, but when one sneaks through it can do considerable damage. 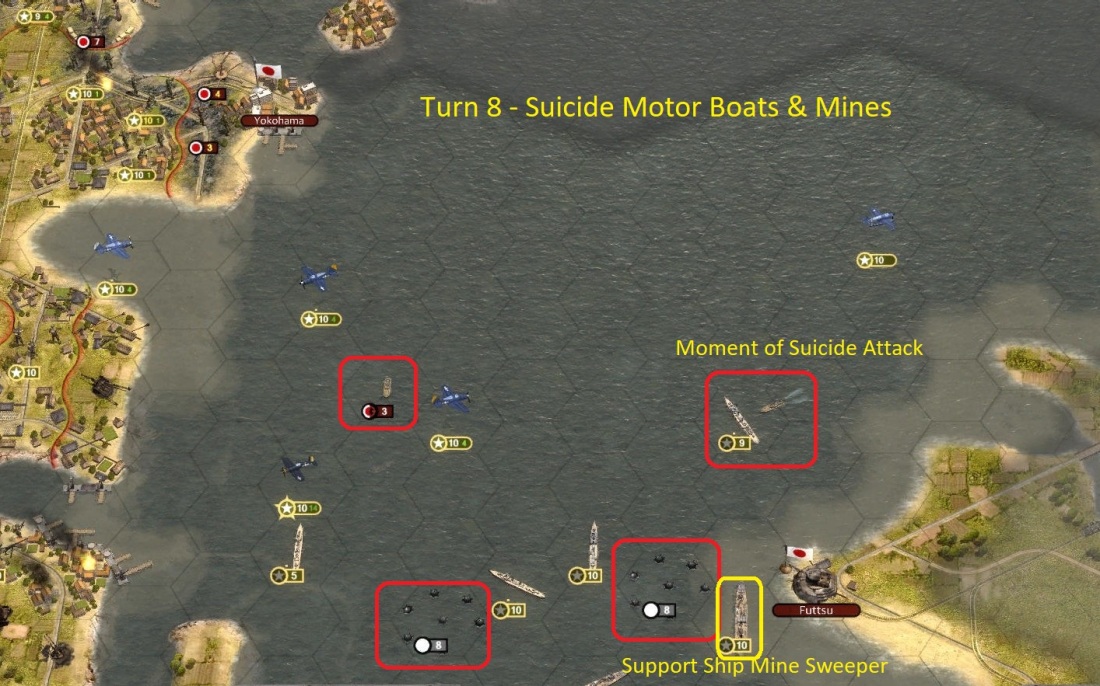 Tanks and Heavy Artillery have landed.  Japanese opposition has been light with few fixed fortifications; ineffectual irregular forces, and the Japanese Army units being clobbered by dive bombers. US Forces control the entire South with no serious opposition spotted to cross a major river South of Tokyo. 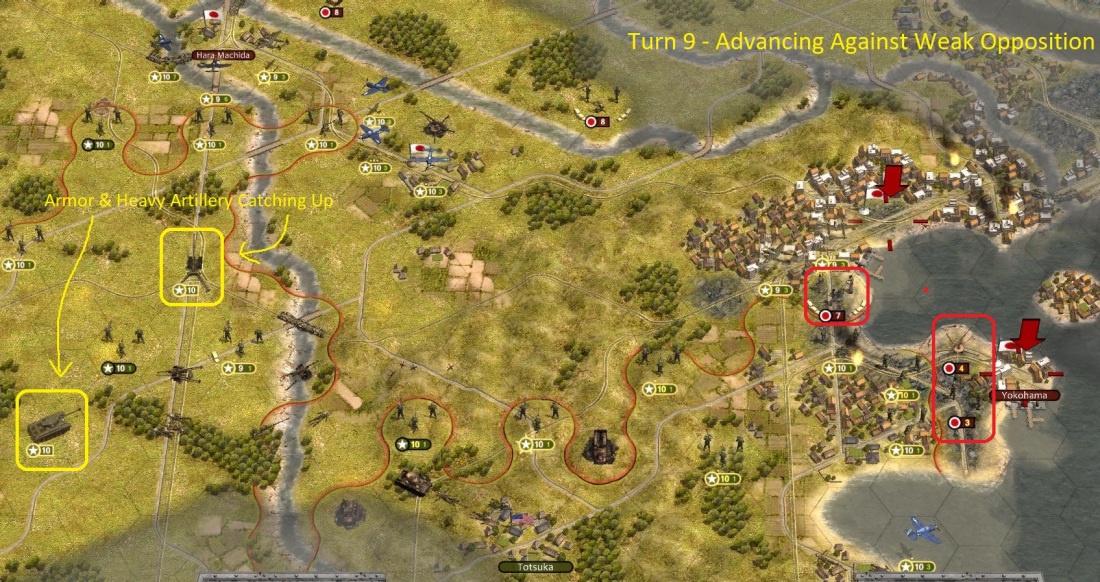 The US Fleet is met by remnants of the Imperial Japanese Navy: one light cruiser, several destroyers and a motley assortment of suicide speedboats. Unfortunately, there are a lot of mines including one which almost sank an entire destroyer squadron. 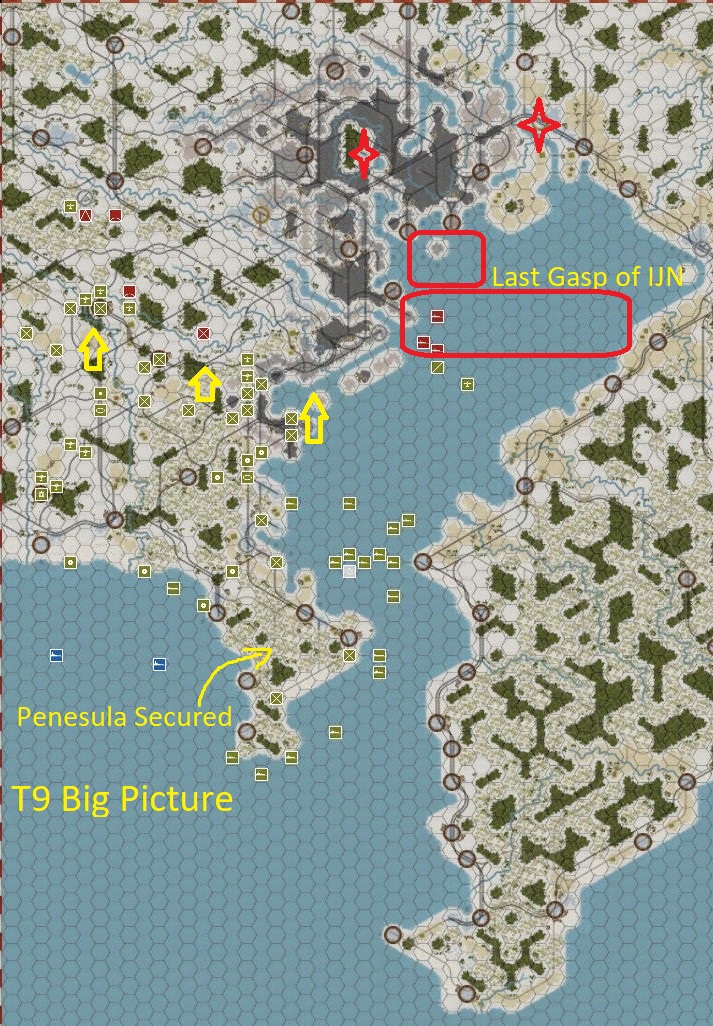 Overall, by Turn 10 (out of 60) US forces are poised to cross a major river with little to no serious opposition. The rear is secure and forces are rapidly moving up from the South to support the advance towards the heart of Tokyo. The fleet is steaming up the bay allowing Naval bombardment to hit coastal hexes. The remainder of the Japanese Navy poses little threat with most damage to US forces coming from naval mines. 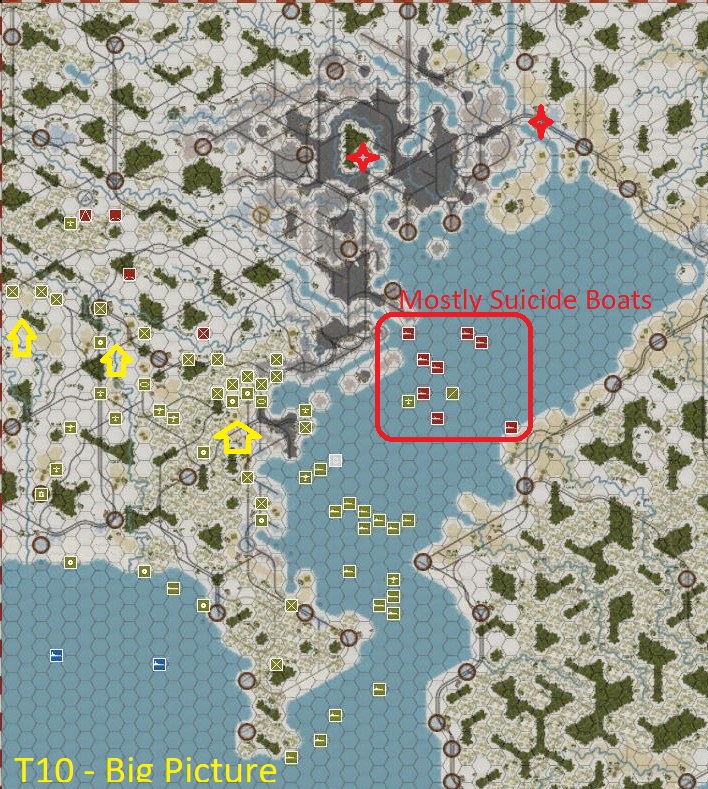